Crude oil prices have stabilized Tuesday but further gains are likely as the markets reflect on forces loyal to Libyan General Khalifa Haftar continuing to advance on Tripoli, where the United Nations-backed Government is based.

This Libyan unrest is just the latest factor boosting prices, including efforts by Saudi Arabia and its allies to restrict output and US sanctions on Iran and Venezuela. Meanwhile, from a technical perspective, the price of US crude has broken above an upward-sloping trendline joining this year’s higher highs, and previous resistance at that trendline could now turn into support. 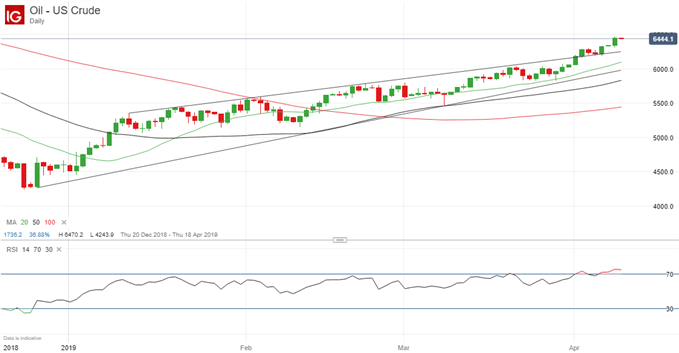 The fly in the ointment is concern that global demand for oil could weaken if the world economy slows, as it seems to be doing.

As for the immediate future, much will depend on the American Petroleum Institute’s weekly inventory data, due later Tuesday. The API reported a build in stockpiles in the week ending March 29 and any further increase could damage oil prices’ climb higher. As usual, attention will then turn to the official data released Wednesday and, with the US crude price already at its highest since last November, could lead to some near-term profit-taking before the price climb resumes.

As for IG client sentiment data, that is currently sending out a bullish signal:

You can read more about crude oil here