USD: While President Trump may want to ‘make QE great again’ following his recent remarks that the Fed should cut rates and begin QE, major USD pairs are unlikely to get such excitement at the upcoming Fed meeting minutes, which is likely to maintain a balanced view on rates with the potential for further clarity as to how the central bank will bring its balance sheet unwind to an end. Today’s price action has seen the US Dollar weaken against its major counterparts albeit modestly with the index eyeing a move towards the 97.00 handle.

EUR: In the wake of the mild dip in the greenback, the Euro has seen a modest lift towards 1.1250. Elsewhere, ECB sources increased the likelihood that the upcoming ECB meeting may be somewhat subdued with reports noting that the option of tiering interest rates had not been discussed by the committee. As a reminder, ahead of the meeting, the latest COT data show that speculative added bearish bets on the pair to the most since December 2016.

Crude Oil: Brent crude futures rose to a 5-month high having topped $70/bbl with the latest catalyst stemming from an escalation of fighting in Libya, which in turn raises concerns over supply disruptions in the region. Alongside this, union strikes are said to cut Shell’s Pernis refinery production by roughly 65% and as a reminder, this refinery in the largest in Europe, with a capacity of 404kbpd. Subsequently, commodity currencies are firmer with CAD, NOK and RUB underpinned, while net importers (TRY, INR) have suffered.

Gold: Modest gains for gold prices this morning, having reclaimed the $1300 handle as the USD drops towards the psychological 97.00 level. Elsewhere, equity markets are slightly softer this morning, with Dow futures feeling weigh from the drop in Boeing shares, as such, safe haven flows have also kept gold bid. The central bank buying spree for gold has continued after weekend reports showed that the PBoC added to its gold reserves for a 4th consecutive month. 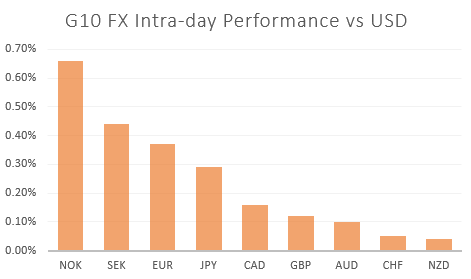