GBPUSD – Waiting for the Next Brexit Chapter:

A decisive week for Brexit negotiations, and Sterling, in which a cross-party compromise may be forged, but time is limited with the UK currently set to leave the EU at the end of the week. UK PM Theresa May and opposition leader Jeremy Corbyn will continue today to try and thrash out a deal that is acceptable to both Parliament and the EU, although weekend commentary has already highlighted divisions between the two parties. Both sides are determined that the UK will not leave the EU without a deal and talk of a softer Brexit or customs union continue to grow ahead of an EU Emergency Summit meeting on Wednesday. PM May has already asked the EU for an extension until June 30, but it is likely that unless a consensus has been formed that the EU will only offer a longer extension – one year has been talked about – which would mean that the UK would have to take part in European Parliamentary Elections, something that the UK government does not want to happen.

Today may well see the House of Lords examining the Yvette Cooper bill that passed last week in Parliament. The proposal, that passed by just one vote, seeks to force the UK to ask for a Brexit extension to prevent the country crashing out of the EU without a deal. In legal terms, the UK will leave the single-block on Friday this week unless an agreement has been found or an extension has been granted.

Sterling has recovered some of Friday’s sell-off that saw GBPUSD touch a one-week low of 1.2985 after having made a 1.3195 high on Wednesday. The pair have broken and closed below this year’s trend which turned from support to resistance at the end of March. The 200-day moving average remains supportive around the 1.2960 level while the CCI indicator shows the pair turning higher after having been mired in oversold territory. 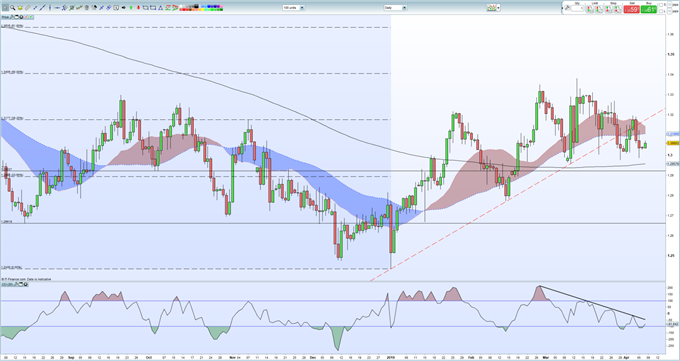