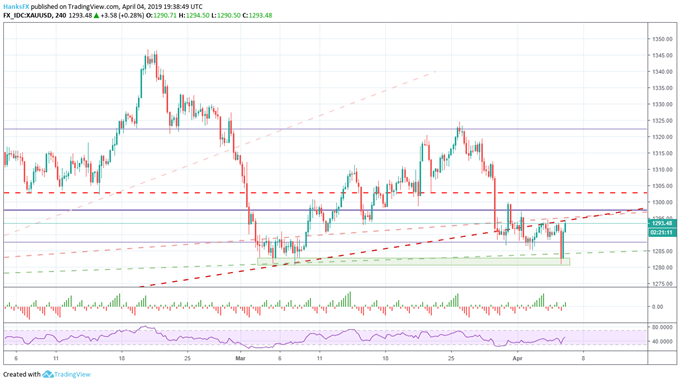 The outlook for gold is intriguing as a series of tailwinds look to benefit the precious metal in the short-term. After a failed test of technical support at the $1280 - $1282 level, bulls were quick to drive the commodity back to test nearby resistance at $1293 – suggesting an unwillingness to accept new yearly lows.

Second Quarter Forecasts are out! Download forecasts for gold, the US Dollar, the S&P 500 and more.

The resistance originates from a trendline which dates to mid-October of last year. Although the line has been passed-through many times, recent price action suggests the level still garners some respect. A daily close above the level could open the door higher in the days to come.

After such a break, subsequent resistance may be offered by the 23.6% Fib level at $1297. Beyond that, the $1300 psychological level and $1302 – the lower bound of gold’s range in the first half of 2018 - are final areas for concern. Although the topside technical landscape is formidable, fundamental tailwinds may even the odds.

The US-China Trade War and Gold

Conflicting reports have been released that President Trump will announce a summit between himself and Chinese President Xi Jinping to present a possible trade war resolution. On April 4, President Trump announced a deal was still a few weeks off, possibly four. If a deal were to be reached, it would likely prove troublesome for the Dollar (via the DXY Dollar basket) as some safe-haven appeal is lost as it trades north of 97. 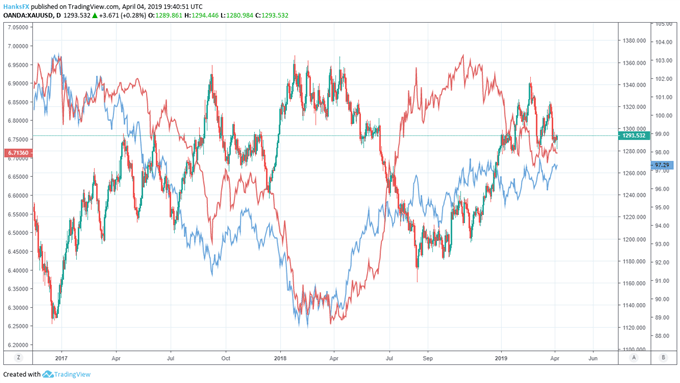 Similarly, a conclusion – or reduction in tariffs – would likely weaken USDCNH. The pair has a very strong inverse correlation to gold so Dollar weakness versus its Chinese Yuan counterpart would likely serve to bolster gold’s position. Together, these fundamental themes may work to overcome topside technical levels and open the door for gold to test levels near March highs.

Invalidation points to be wary of exist beneath the recently-tested support at $1280-$1282. A break below this area would likely be met with further declines. Follow @PeterHanksFX on Twitter for updates and technical levels as the trade progresses.