The S&P 500 will keep a watchful eye on the release of ISM services data on Wednesday. Thus far, the week has offered contrasting releases as retail sales fell short, but employment and manufacturing data came in above expectations. Subsequent price action suggests traders are content with the data and Wednesday’s release will give further insight on the economy’s growth outlook – which is showing signs of a rebound. 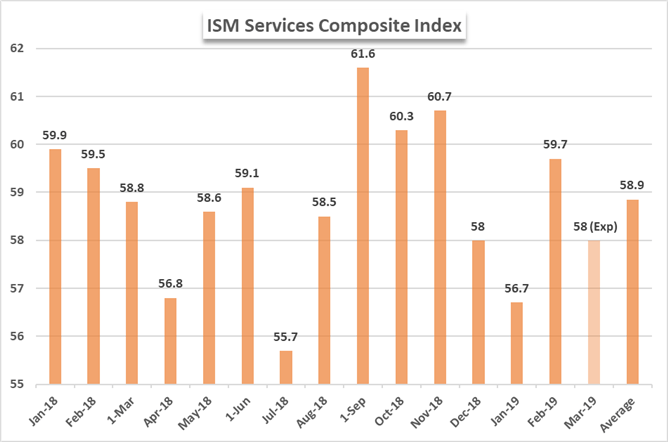 Recent service sector data from the Institute of Supply Management has been relatively volatile over the last four months and notably lower than the composite readings from September to November. Apart from the expected data print tomorrow, the average of the composite index is 58.9 over the last 16 months. Should the data come in as expected, it could prove enough of a catalyst to push the S&P 500 higher given the current market sentiment and price trend. That said, it would contribute further – albeit slightly – to the broader concern of deteriorating economic growth.

Outside of hard data, trade war headlines may return to the fray. On Tuesday, an official from the US Commerce Department announced “US-China trade war talks are at a point where a deal is more likely to go forward than not.” The announcement precedes US-China trade negotiations in Washington this week, following discussions in Beijing at the end of last week. While trade war headlines have come and gone in the past, the theme has remained an underlying concern for US equities and frequently influenced sentiment. 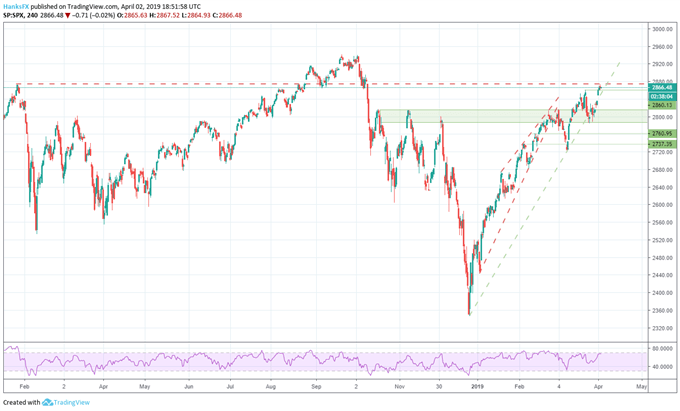 As for the immediate future, traders will have to decide whether short-term optimism and relatively robust data can outweigh longer-term concerns of slowing growth and trade wars as the S&P 500 runs into technical resistance at 2,875. The level marks the high from February 2018. If ISM data falls short, nearby support resides at 2,860.

A trendline from December 24 also exists to the downside, but the respect it commands as a technical level is questionable due to recent breaks and its steepness. For further equity insight, follow Peter Hanks on Twitter @PeterHanksFX.