The price of US crude oil continues to climb within an upward sloping channel in place since last December and now looks well placed to break to the upside having already touched its highest level since November 8 last year. Any break above the resistance line joining the 2019 higher highs would lead to another leg upwards, while failure would bring it back down to within the channel, which is slowly narrowing. 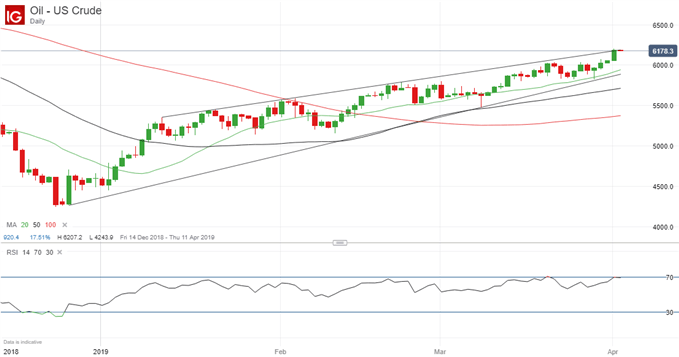 To the upside, a long-term target could be the October 3, 2018 high at $76.81 per barrel while to the downside there is likely to be near-term support at the $60 “round number”.

From a fundamental perspective, the oil price has been helped by news Tuesday that Russian oil output fell by 11.3 million barrels per day in March. In addition, production by members of the Organization of the Petroleum Exporting Countries (OPEC) dropped by 295,000 bpd in March, with Saudi Arabia cutting output to a four-year low, according to a Bloomberg survey.

Elsewhere, the US Government is considering additional sanctions on Iran, a US official told reporters Monday, and Venezuela’s Jose crude export terminal has halted operations due to a lack of electricity supply, according to Reuters.

On the demand side of the equation, recent data suggest a recovery in the global economy. The Caixin purchasing managers’ index for China’s manufacturing sector in March – released Monday – was higher than expected, as were the UK manufacturing PMI and the US manufacturing index calculated by the Institute for Supply Management (ISM).