- UK PM May has emerged from her cabinet meeting with calls for “national unity,” seeking consensus with Labour leader Jeremy Corbyn on finding a path forward.

- Similarly, UK PM May will seek another short-term extension to the Brexit deadline (currently April 12).

- GBPUSD rallied back above 1.3100 as betting markets started lowering the odds of a no deal, “hard Brexit.”

UK Prime Minister Theresa May’s day-long meeting with her cabinet has yielded important developments in the Brexit process, which at this point in time suggest that a “soft Brexit” deal is still very much in reach.

Despite only having the backing of 10 of her 24 ministers, UK PM May announced that she would seek another short-term extension to the Brexit deadline, pushing it back from April 12 but no further than May 22 – that way, the UK can still avoid participation in European parliamentary elections.

But perhaps the most notable development was her decision to reach across the aisle and call for “national unity” in the face of what’s quickly become a domestic political crisis for the UK. The prime minister said that she would find common ground with Labour party leader Jeremy Corbyn on several “options” on the path forward.

Done Trying with Tories and DUP

Still, with the EU insisting that the EU-UK withdrawal agreement is still valid, UK PM May has said that any options moving forward will still need to be within the confines of the framework. This more or less means that UK PM May is done trying to whip the votes of her Tory party or the Northern Ireland DUP to support the Withdrawal Agreement. 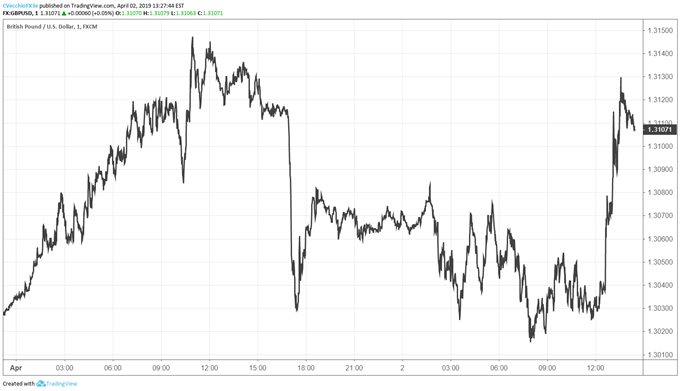 Following the developments, GBPUSD immediately rallied from near 1.3037 to as highs as 1.3130. At the time this report was written, GBPUSD had eased back to 1.3107.