The Brazilian Real will be waiting for the release of industrial production data, with year-on-year forecasts currently pegged at 2.3 percent after a previous contraction of 2.6. Following the publication of the previous data, USD/BRL rose almost one percent. Economic reports coming out of Brazil have been broadly soft as the country struggles to grow in a slowing global economy amid fears that the government may not be able to push through key structural reforms.

Year-to-date, the benchmark Ibovespa equity index has risen over 10 percent after retreating from an all-time high when it broke above the 100,000-point mark for the first time in its history. Hopes over President Jair Bolsonaro’s pension reform passing through congress has been fueling the rise. Foreign direct investment has also skyrocketed, reaching a one-year high on August 31 when the local elections were strongly pointing to a win for Bolsonaro. 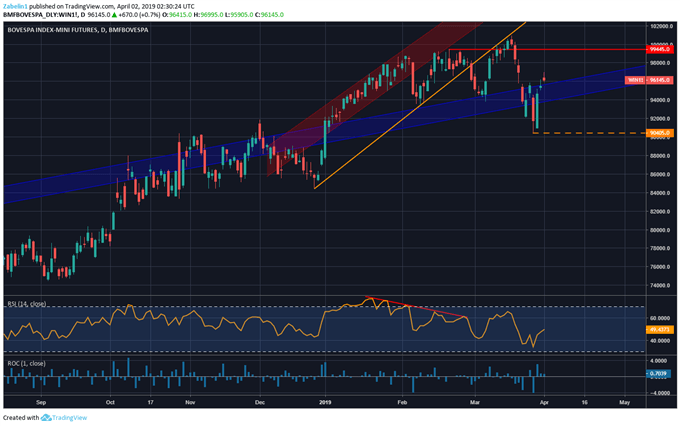 However, fears over Bolsonaro passing his pension reform have begun to swell and have caused Ibovespa futures to wilt and shave off over eight percent. It has since recovered five percent, but the ability for the index to continue rising at such a steep incline rests on a precarious and uncertain outlook. Cabinet-infighting, disorganization and power-hungry pursuits by “super ministers” have made investors nervous.

The Brazilian Real has lost over five percent against the US Dollar as optimism over Bolsonaro’s reforms wobbles, though growing demand for the Greenback amid fears of slower global growth also likely contributed to USD/BRL’s rise. The pair is now resting at a key juncture between the intersection of the February 1 rising support and 3.8504 price floor. 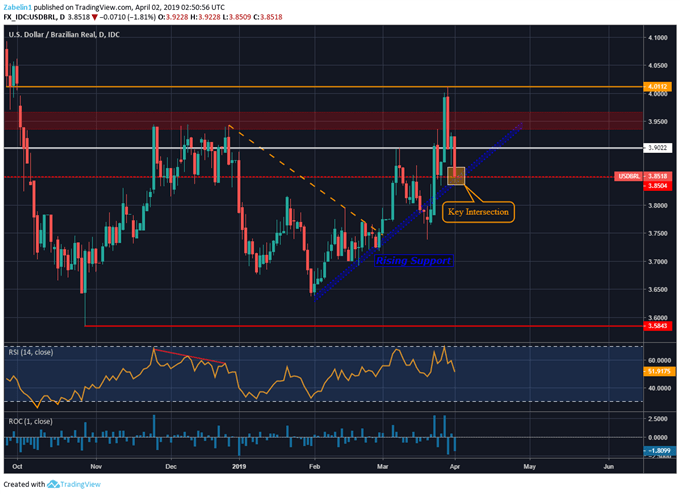 A break below or above this crossing may serve as a key signal on trader’s sentiment toward the pair. To get more technical insights on USDBRL, you may follow me on Twitter @Zabelin.Dimitri.