The Bank of Japan’s Tankan survey for the year’s first quarter found large manufacturers gloomier than expected. Their sentiment index came in at 12, below both the 13 expected and the previous quarter’s 19. The last quarter’s reading was the lowest since the first three months of 2017.

Large manufacturers’ outlook slipped further, to record a score of 8, when the previous print was 15. Smaller firms were gloomier still, with only large, all-industry capital expenditure scoring a beat. Its index came in at 1.2%, which was better than the 0.7% expected but well below the previous quarter’s 14.3%.

The Japanese Yen was weaker on this release, but, as there is nothing whatever here to suggest any change in ultra-loose monetary policy from the BoJ, there wasn’t far for it to go. 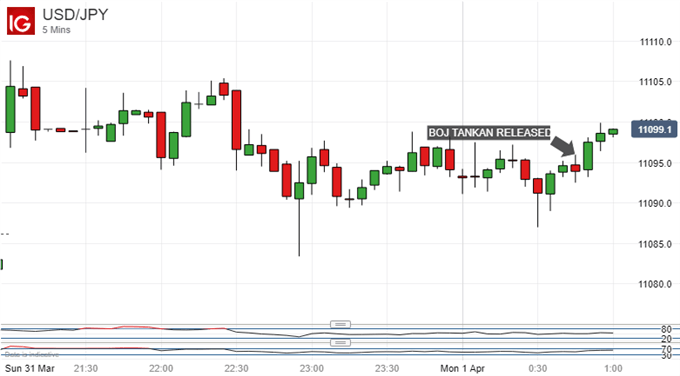 Chinese Numbers Picked Up, But From a Low Base

However, these numbers follow Sunday’s news that Chinese manufacturing picked up pace in March. The Official Purchasing Managers Index came in at 50.5. That was above both February’s three-year low of 49.2 and, crucially, the 50.0 point which separates expansion from contraction. March was the first month in four to achieve that an above-50 score.

It wasn’t all good news though. Export orders declined for a tenth straight month, but the non-manufacturing PMI ticked up to 54.8 from 54.3.

All up these data still paint quite a bleak picture of Asian and, perhaps, global economic prospects, given the bellwether status of both the Chinese and Japanese economies. There may be some hope that Chinese manufacturing is bottoming out, but both export titans are clearly feeling the global-slowdown chills and a trade settlement between the US and China can hardly come soon enough- assuming it comes at all.

The Japanese Yen is starting to weaken again against the US Dollar on its daily chart, after a period of strength in March as markets assessed the Federal Reserve’s more cautious stance on raising interest rates.

Now those same markets are starting to realize that such caution will be universal, and that the US has higher rates than most anyway, certainly much higher than Japan’s. 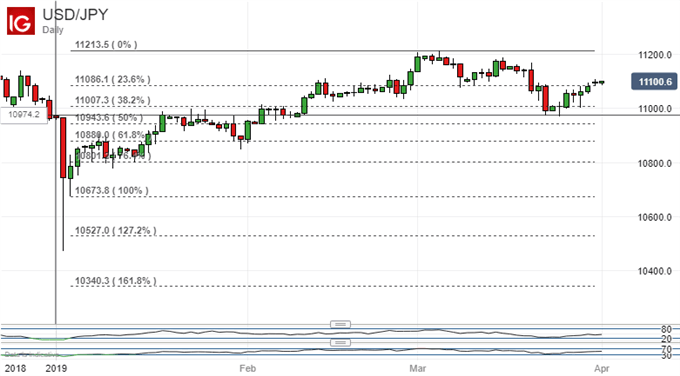 It is now flirting with an upward break of the first retracement, which comes in at 110.86.