The central bank of Mexico came out with their latest interest rate decision on Thursday, keeping the overnight rate at 8.25%. This does come as a surprise for some economists given that their rate is relatively high at 8.25% compared to other emerging market countries. However, it does not seem to have had a negative impact on the currency as the MXN appreciated against the USD moments after the news was released. 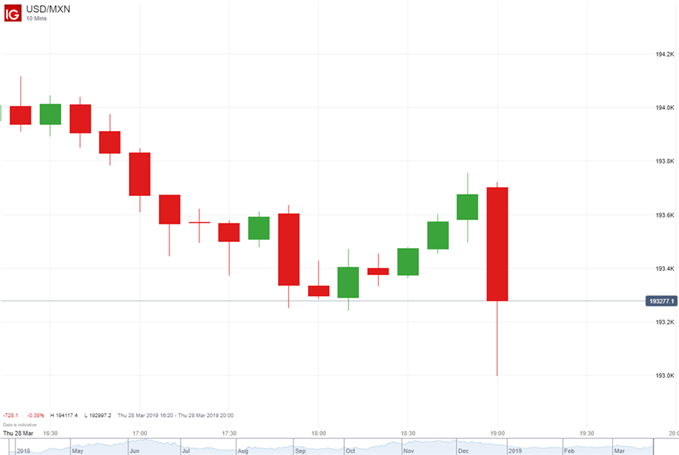 The unchanged rate may be due to the inflation rate decreasing from 4.37% to 3.94%. This may indicate that the inflation rate is being controlled. Therefore, less of a need to increase the overnight rate which the Mexican central bank has steadily increased over the last three years.

Although inflation may seem to be less of an immediate threat, the political and economic situation may still cause some change to the current monetary policy outlook. Mexico has a new president, Andrés Manuel López Obrador, who has stated that he looks to bring radical change. Economists have stated that due to the new president’s views, it may be driving corporate investors out, which could be one of the reasons why economists are forecasting a slowdown in growth.

In addition, there still seems to be uncertainty in the trade agreement between the U.S and Mexico that is in the works for summer 2019. The U.S House of Representatives have some concerns about the new North American Free Trade Agreement (NAFTA) called United States Mexico Canada (USMCA).

House speaker Nancy Pelosi has stated earlier this month that the agreement’s environment, worker’s rights in both countries, pharmaceutical and enforcement needs to be looked at before it could be supported. However, Both Mexico and Canada have expressed that that they may not agree with USMCA if the tariffs have not been lifted, creating further uncertainty in all three North American markets.

As for upcoming events that could further impact USDMXN, the country is due to release their consumer confidence index and purchasing manager index next week. The indicators may give some insight on the health of the economy which could in turn influence future rate decisions.