The S&P 500 will end March with the best quarterly performance since Q3 2009 if it is able to close above 2,807.89 in Friday’s session. During the recovery from 2018’s rout, the index returned roughly 12% as of Thursday and currently trades in an area of congestion - waiting for catalysts. With an uncertain fundamental backdrop, quarter-end “window dressing” from mutual funds and other portfolio managers may look to shake up the index’s performance as it crosses the finish line. 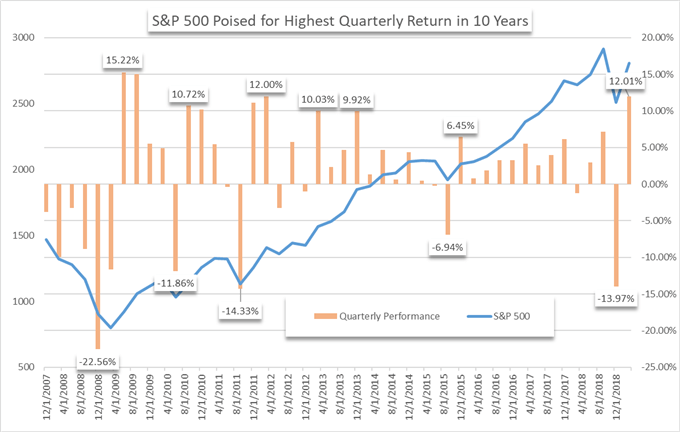 Window dressing is a strategy used by fund managers – typically near year or quarter-end – in which the manager looks to improve the appearance of their fund’s performance by adjusting the fund’s holdings. To pursue this plan, a fund manager sells underperforming stocks in the portfolio and looks to purchase high-flying stocks that have dragged the broader S&P 500 higher over the quarter. Once executed, the manager can present the new portfolio – now full of overperformers – to clients.

The practice creates the potential for significant quarter-end flows as managers scramble to buy and sell some of the index’s outliers. Given the uncertain landscape of the S&P 500, increased flows in some of the more sensitive constituents could result in heightened volatility and an intriguing opportunity to capitalize on fundamental themes in the equities via exposure to the currency market.

During the first quarter, USDJPY has maintained a relatively strong correlation with the S&P 500. Despite the dovish policy plan out of the Federal Reserve, the Bank of Japan maintains a significant yield differential to the Greenback through its own ultra-dovish policy. Thus, the relatively risk-on US Dollar has traded higher versus the Yen, trailing the riskier S&P 500. 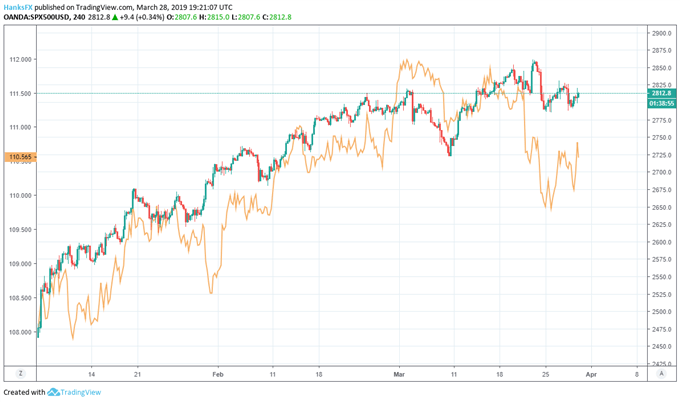 With the S&P 500 recently devoid of trend commitment and an opaque fundamental backdrop, themes in USDJPY may be easier to isolate and extrapolate a position from. That said, we can look to IG Client Sentiment Data for insight on client positioning on both markets. 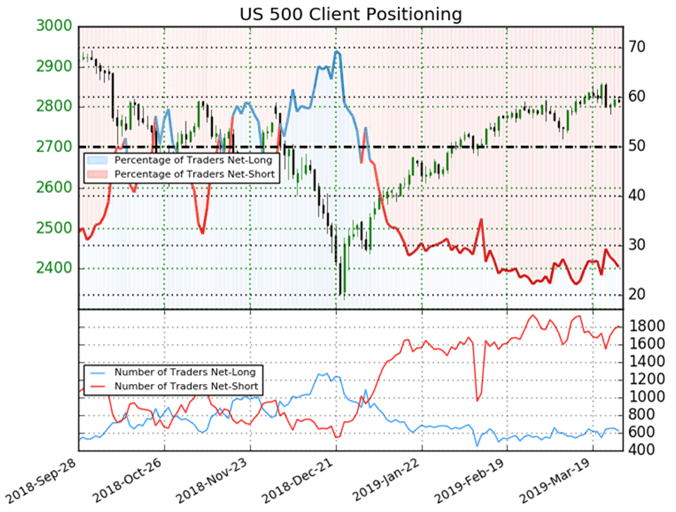 Client positioning reveals traders are overwhelmingly short on the S&P 500. Retail sentiment is more often a contrarian signal during trends as the category of traders tends to seek out reversal. However, if the climb in risk assets including the US index is winded, that could prove fortuitous – though not through foresight. Interestingly, the positioning on USDJPY is less clear – somewhat explained by the less-than-perfect correlation with the S&P 500. 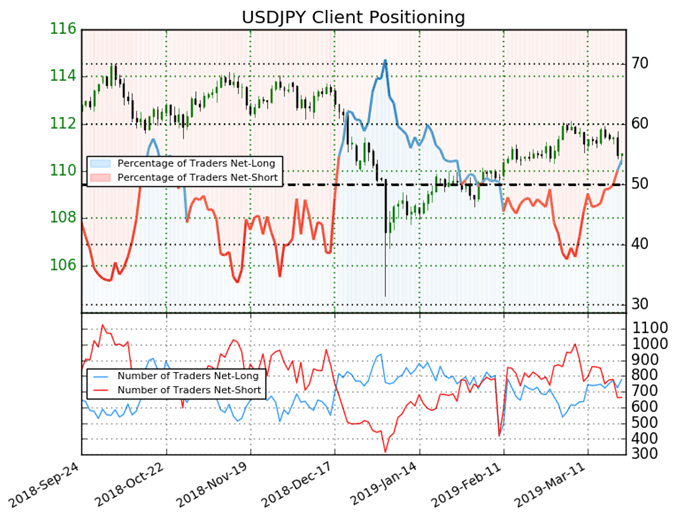 IG clients recently shifted their positioning on USDJPY with traders slightly favoring the long side. However, the percentage is nearly split at 53% net-long which is a less commanding signal than that offered by client positioning on the S&P 500. Further, the total number of short positions on USDJPY has declined substantially over the last month as traders closed positions to cut losses.

Meanwhile, the total number of traders net-long has only slightly increased over the same time frame. This suggests traders are no-more bullish on the pair than they have been in the last month, just less-bearish. Considering again client positioning is a contrarian indicator against strong trends, the magnitude of short positions on the S&P 500 and the mixed positioning on USDJPY may indicate an opportunity to explore the impact of the quarter-end window dressing of the S&P 500 through exposure to the USDJPY pair.