The UK Parliament last night voted down all 8 amendments presented to them with the closest vote a proposal for a permanent customs union with the EU, which just failed to pass by 272 votes to 264 votes. These 8 indicative votes are likely to be voted on again next Monday where movement may be seen to get one or two options through.

And before this all happened, Theresa May said that she would stand down as Prime Minister if her controversial and unloved Withdrawal bill was voted through, at the third time of asking. This bill may be presented to the House at the end of the week, although the PM has already said that she will only do so if the bill has enough support to pass. This currently looks unlikely as the DUP have reiterated that they will not sign the bill, leaving the PM short of votes. The Speaker of the House, John Bercow, will also have a say in this after he rejected PM May’s last attempt to represent her bill, saying it was substantially the same bill and needed to be changed to be allowed to be voted on.

Sterling is currently drifting lower but remains underpinned despite the complete lack of leadership shown by the Prime Minister and by Parliament. In normal circumstances, political upheavals currently seen in the UK would send the domestic currency spinning lower, but this has not happened. It is becoming more likely that a No Deal Brexit will not happen and that either PM May’s bill will pass, or the EU will grant the UK a long extension.

GBPUSD remains above trend but the gap between the two is closing. The pair are currently below the 20-day moving average but just above the 50-dma, clouding the short-term outlook. The last three days have seen support between 1.3140 and 1.3160 but this may now be broken, leaving 1.3080 - the crossover of last Friday’s low and trendline support - and 1.3000 short-term downside targets. 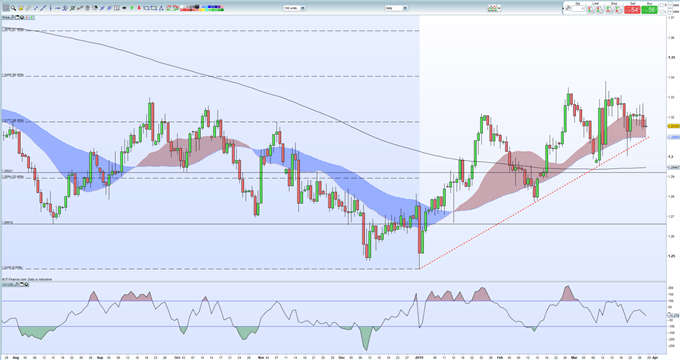 Retail traders are 55.4% net-long GBPUSD according to the latest IG Client Sentiment Data, a bearish contrarian indicator. Recent changes in daily and weekly sentiment however give us a stronger bearish GBPUSD bias.