In the latest Brexit development, PM Theresa May offers up her future resignation contingent on MPs supporting her Brexit deal when it comes to vote for a third time. The Prime Minister’s decision is believed to open the door for her successor to continue future negotiations with the European Union which could be enough of a deal sweetener to convince majority of British politicians to back her Brexit Withdrawal Agreement.

Prime Minister Theresa May originally came into power following the historical referendum that removed David Cameron from the position. The announcement was made prior to a series of indicative votes that will be held on various Parliamentary motions later today but comes after PM May lost the House of Common’s agenda to MPs earlier this week.

The PM’s said in her statement “we have to finish the job in hand...I know there is a desire for a new approach and new leadership in the second phase of the Brexit negotiations and I won’t stand in the way of that.” She concluded by requesting MPs to complete their historic duty by backing her deal and delivering on the referendum result with a smooth, orderly exit.

The British Pound was up slightly but little changed on balance immediately after the news. Although, the Sterling could resume its climb experienced so far this year – especially if the PM’s new offer is now enough to get her deal a majority backing with support from key Brexit hardliners and DUP. 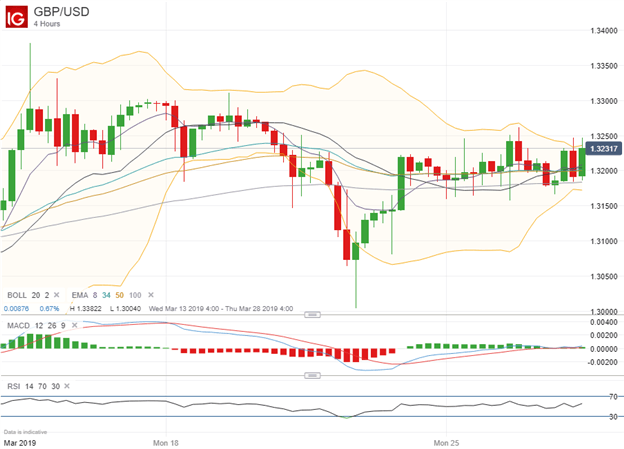 GBPUSD year-to-date performance was up roughly 6 percent when spot prices peaked near the 1.3382 mark on March 13 before slipping roughly 300 pips over the last two weeks. The short-term selloff came amid a rush of Brexit uncertainty with British MPs backing themselves up against the previous March 29 Brexit deadline as a no-deal departure appeared increasingly likely.

The European Council decided to grant the UK a ‘Brexit delay’ until April 12, however, providing the House of Commons with more time to sort out its desired Brexit path. The offer to extend Article 50 is contingent on passing PM May’s Withdrawal Agreement and the UK could see the Brexit deadline extended further until May 22. This clouded the possible Brexit outcomes considering voiced opposition over the Brexit deal the EU has agreed to which was shot down by British MPs twice already.

To complicate things further, House Speaker Bercow made the decision not to put the Brexit deal to a third meaningful vote since the same motion cannot be voted on twice. That same day, British MPs approved the Letwin Amendment taking control of the House’s agenda to determine possible Brexit options that have potential at passing with majority. Now, these ‘indicative votes’ will be voted on in Parliament later tonight and look to provide further clarity over the GBP’s next direction.