Brexit Latest – PM May Under Pressure to Resign

The latest chapter in the Brexit saga sees UK PM Theresa May looking over her shoulder as hardline Brexiteers plot to oust the Conservative leader. Various stories over the weekend suggest that either the PM will resign early if MPS back her Withdrawal bill if it is presented to Parliament again this week or that the Prime Minister will be forced to stand down to let another leader steer a new course in Brexit negotiations. The British Pound is relative sanguine about these rumors, indicating that the market no longer feels that the PM is the best person to continue Brexit discussions with the EU.

Later today, Members of Parliament are expected to discuss a series of Brexit options with talk that there may be as many as six indicative votes put to the House on Wednesday to see if a consensus can be found. On Tuesday the PM may seek to put her Withdrawal bill back in front of Parliament for a third time although she will only do this if she is confident that it will be voted through.

Sterling remains stable, especially so for a currency where a change of leadership is mooted and continues to respect the uptrend started at the beginning of the year. This trend line was broken briefly last Thursday but GBPUSD has since pushed higher, although a series of lower highs over the last two weeks cast a bearish shadow on the pair. The 38.2% Fibonacci retracement level around 1.3175 is acting as a pivot today with support down provided by the 50-day moving average at1.3100 and the trend line around 1.3065. 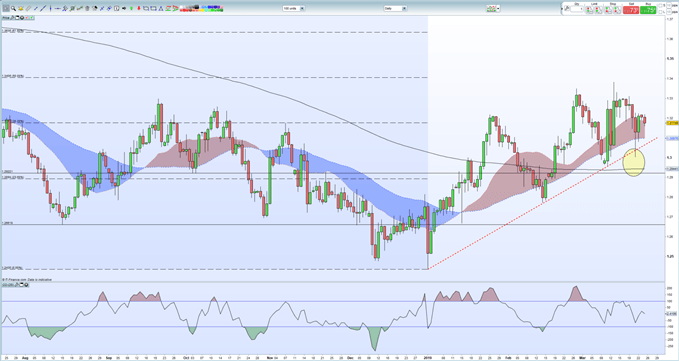