Norwegian Krone (NOK) traders will be eagerly tuning into today’s rate decision from the Norges Bank. The general consensus is an expectation that policymakers will lift rates from 0.75 percent to 1.00. Despite Norway’s economy exceeding economists’ expectations for several months, there is doubt in the underlying strength and momentum.

Concerns about slower growth out of China, the US and Europe – the latter of which is particularly important for Norway – may impact forward guidance on monetary policy. This follows Wednesday’s FOMC meeting which included a gloomier-than expected outlook for US economic growth and inflation. USD/NOK subsequently plunged, though the extent of the drop may not last long. More on that later.

If you want to receive greater in-depth technical and fundamental analysis on USD/NOK, you may follow me on Twitter @ZabelinDimitri.

As one of the largest exporters of natural gas – and the EU’s second-biggest supplier – the Norwegian Krone is sensitive to changes in global demand. The bedrock of Norway’s economy rests on the petroleum sector and accounts for a significant portion of their benchmark OBX equity index. 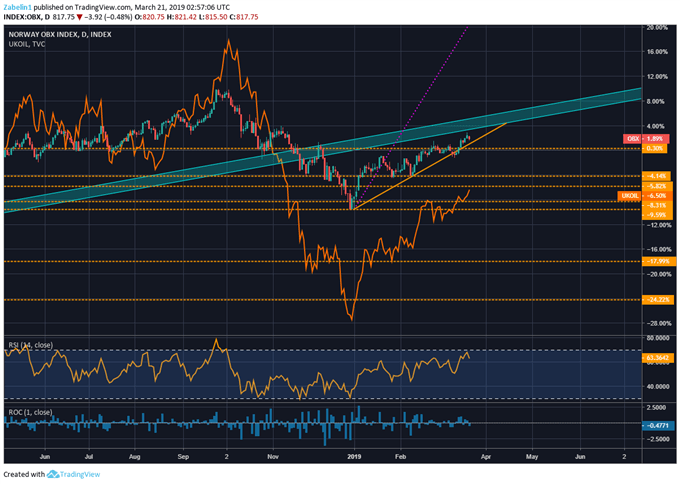 This then brings us to the central question: with an economy that is supported by a growth-sensitive commodity, can Norway endure a policy measure that may tighten credit conditions? With Europe slowing as political uncertainty in the region rises, their exports to the EU may dwindle, and could therefore weigh on Norway’s GDP.

If the Norges Bank does indeed raise rates, it may elicit a spike in the Krone, though the duration and upside momentum will likely fade. Markets have already priced in a hike, and traders will likely quickly sober up to the reality that the fundamental outlook globally and for Norway remains dim. Now, if the central bank held rates, NOK would likely plummet to a greater degree than it would rise if policymakers raised rates.

This is because a hold on rates would signal that officials are more pessimistic than previously thought and would catch investors off-guard. Capital flight from the Scandinavian currency would then likely ensue and would send USD/NOK higher.

If risk sentiment continues to sour, traders may then flock to the US Dollar as its appeal as an anti-risk asset grows against the backdrop of slower growth and uncertainty. This is primarily what has, and what will likely continue to drive the pair higher.