While Wednesday’s FOMC meeting fell largely within market expectations, March’s Summary of Economic Projections (SEP) offered a bleaker outlook for the US economy. With the Fed’s policy outlook solidified, the Dow Jones now faces conflicting fundamental themes. However, history may suggest lower GDP forecasts are not necessarily bad news for the Dow Jones. 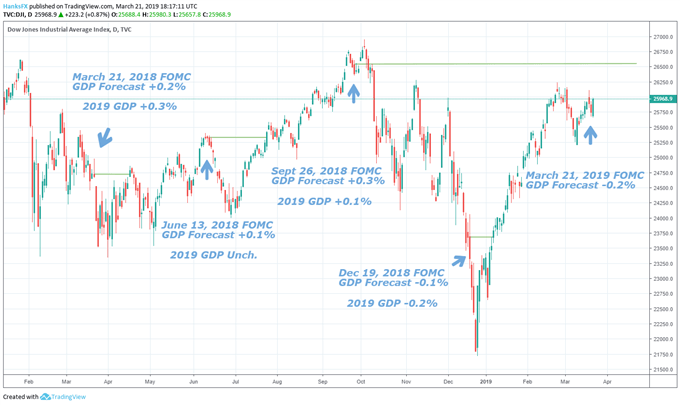 Since last year’s March FOMC meeting, all five meetings with fresh updates on forecasts saw a change in the GDP outlook for the US economy. It is important to note that each quarterly event in 2018 also accompanied a 25-basis point increase to the interest rate range, a fundamentally bearish development for equities.

That said, three of the five GDP forecast updates were upward revisions. Each subsequently saw the Dow Jones trade lower in the week/s that followed as the case for future hikes was bolstered alongside an immediate rate increase. The March, June and September FOMC meetings saw an average decline of 1.81% in the following five trading days. In the following three weeks, each event preceded an average decline of 3.27%.

In comparison, lower adjustments to the US GDP horizon were followed by more mixed performance. December’s meeting - the last to be accompanied with an interest rate hike – declined 3.05% in the subsequent five trading days and rose 0.6% in the following three weeks. It is worth noting the extreme volatility in the Dow Jones around December’s FOMC meeting, exacerbated by holiday conditions. 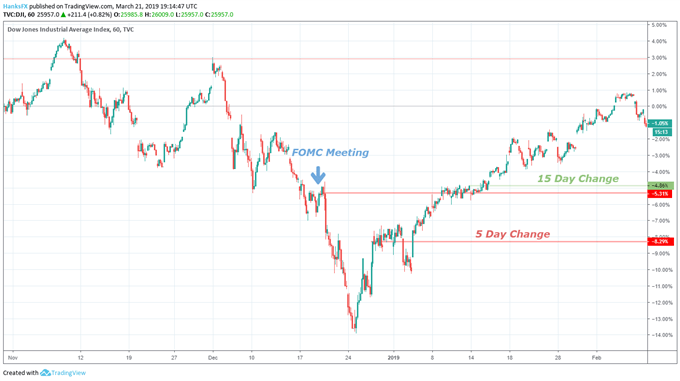 The decision to hike rates at December’s meeting followed a dovish shift from Fed Chairman Powell in late November and the potential to pause rate hikes in 2019, which markets have now realized fully. In its most recent insights, the group’s median outlook calls for changes in the interest rate through the year while the year's GDP forecast was lowered from 2.3 to 2.1 percent. Given the past performance of the Dow Jones following downward GDP revisions and their impact on the case for future hikes, the days ahead may see the Average continue Thursday’s rally as the impacts of dovish monetary policy overwhelm concerns of lower domestic growth.