UK PM May Theresa May continues to add uncertainty to the Brexit negotiations with reports that she is seeking a three-month extension, a two-year extension or a combination of the two. As yet nothing official has been announced, leaving the EU waiting and Sterling on edge. Market commentators are increasingly voicing concerns that PM May is trying to force a ‘my deal or no deal’ endgame, with the markets currently giving a little more weight to the PM ‘s deal been eventually passed. If no extension is confirmed, and it is likely that if needed it will be, and PM May’s bill has not been voted through, the UK will leave the EU by default on March 29.

The latest UK inflation data confirmed market expectations in general although the February year-on-year figure ticked up to 1.9% against expectations and a prior reading of 1.8%. Core inflation nudged lower to 1.8% from 1.9%. In conjunction with yesterday’s strong labor figures and robust wages data, the Bank of England may need to look at interest rate hikes sooner rather than later, once the Brexit process has been finally resolved.

While Sterling is still at risk of a No Deal Brexit sell-off, the charts continue to paint a positive picture albeit with bullish bias eroding. Against the US dollar the recent set of higher lows and higher highs remain in place with initial support provided by 38.2% Fibonacci retracement at 1.3177 before the one-month low further back at 1.2960 and the 200-day moving average at 1.2940.

Care needs to be taken on GBPUSD with the latest FOMC policy meeting set for later today. No interest rate hikes are expected but traders should listen to Fed Chair Powell’s thoughts on the future rate path and his latest thoughts on the winding down the balance sheet contraction program. 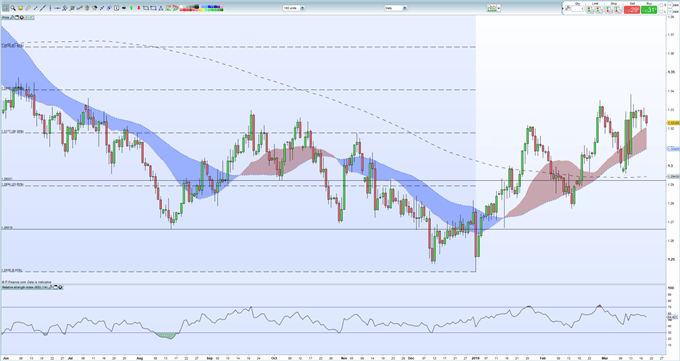