AUD/USD fell to a session low following the release of underperforming year-on-year Chinese industrial production for February. The report came in at 5.3 percent and missed the 5.6 forecast, subsequently leading the Aussie to slide. Other data that was released included retail sales, the jobless rate and property investment, though they didn’t appear to significantly influence the Australian Dollar’s movement. 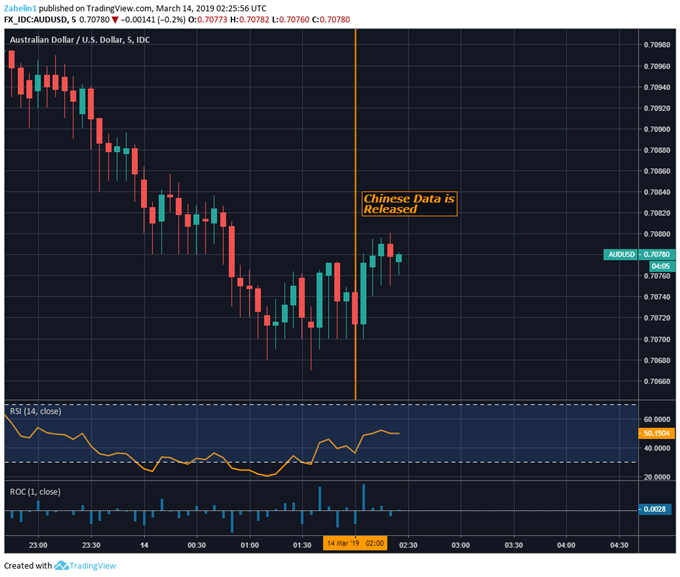 Slower growth in China will likely to continue to weigh on the sentiment-linked Aussie, not least because China is Australia’s largest trading partner. While headlines over the trade conflict between Beijing and Washington have become increasingly less of a concern relative to other immediate event risk, the fragile relationship between the two may still weigh on bullish sentiment for AUD.

Adding general doubts about Aussie’s strength, RBA governor Philip Lowe recently stated that there is no strong case for near-term adjustment in rates. Despite initially planning to raise them as their next move, the outlook has shifted to be more “balanced” with overnight index swaps pricing in a higher probability of a cut over a hike. This comes as housing prices deflated and may begin to impact consumer spending, potentially undercutting a viable reason for raising rates.

Looking ahead, Aussie traders may be monitoring China’s upcoming home prices data scheduled for March 15. Because the economic docket remains relatively light for the rest of the week, it is possible the Australian Dollar’s price movement will be dictated more by external developments. These include US-China trade relations, the upcoming Brexit vote and indications on the direction of global growth.