Data released Thursday have emphasized the current slowdown in the Chinese economy. However, that could benefit AUDUSD and other AUD crosses as the figures raise hopes of more economic stimulus from Beijing – and traders see the Australian Dollar as a China proxy because China is a major market for Australian exports.

The numbers showed Chinese industrial output growth at its lowest for 17 years, as well as a jump in unemployment.

Chinese Premier Li Keqiang has already announced hundreds of billions of US Dollars in additional tax cuts and infrastructure spending and the data suggest that the People’s Bank of China will likely follow suit with more monetary stimulus by cutting banks’ reserve requirements again and guiding borrowing costs lower.

That could help the AUDUSD price, which has been moving higher over the past week but slipped back Thursday when the Chinese data were released.

To the downside, US President Donald Trump said Wednesday that he was in no hurry to conclude a trade deal with China, and a summit between Trump and Chinese President Xi Jinping due later this month has yet to be confirmed.

From a technical perspective, AUDUSD looks to be bouncing from a support line connecting the higher highs recorded over the past week and a near-term target could be the highs just under 0.71 recorded late Wednesday. If they are broken, the February 21 high at 0.7207 would be a possible goal.

However, there is currently no clear signal from IG client sentiment data. Retail trader figures show 65.6% of traders are net-long, with the ratio of traders long to short at 1.91 to 1. In fact, traders have remained net-long since February 27, when AUDUSD traded near 0.7193; the price has moved 1.8% lower since then. The number of traders net-long is 8.2% higher than yesterday and 6.2% lower from last week, while the number of traders net-short is 8.0% lower than yesterday and 0.6% higher from last week.

At DailyFX, we typically take a contrarian view to crowd sentiment, and the fact traders are net-long suggests AUDUSD prices may continue to fall. Positioning is more net-long than yesterday but less net-long from last week. The combination of current sentiment and recent changes gives us a mixed AUDUSD trading bias. 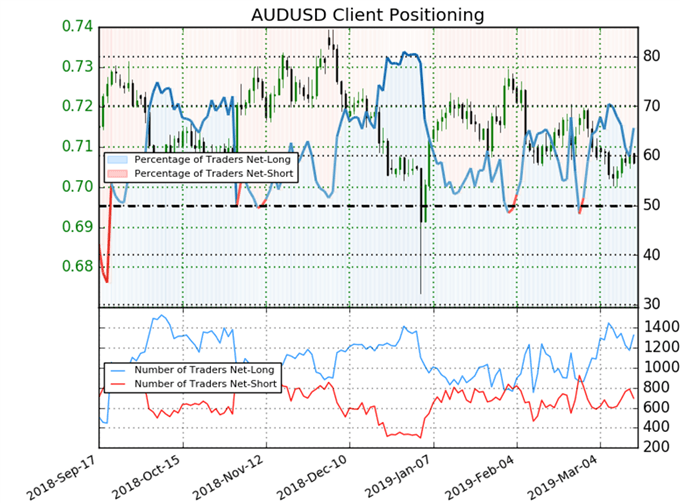 Like to learn more about the sentiment data? You can listen to this webinar to do so.

A brief history of trade wars