Amendment A, which narrowly passed with 312 votes in favor and 308 against, rejects the UK leaving the EU without a Withdrawal Agreement and a Framework for the Future Relationship. On the other hand, Amendment F was voted down with 374 ‘noes’ and 164 ‘ayes’ which would have pushed for a 21-month transition period for the UK to prepare for a no-deal Brexit. 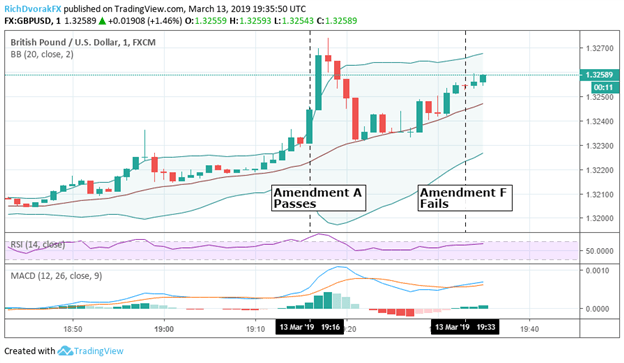 The GBPUSD pushed higher immediately following the news as the risk of the UK crashing out of the EU without a deal continues to dwindle. Although the results of today’s votes were widely expected, the next direction of Brexit remains unclear. MPs will gather at the House of Commons again tomorrow who will be voting to extend Article 50.

This would effectively delay the March 29 Brexit date currently set as the deadline for the UK to separate from the EU. While an extension has looked increasingly likely over the last few days, several aspects such as the length of the extension and its feasibility is still open for debate. 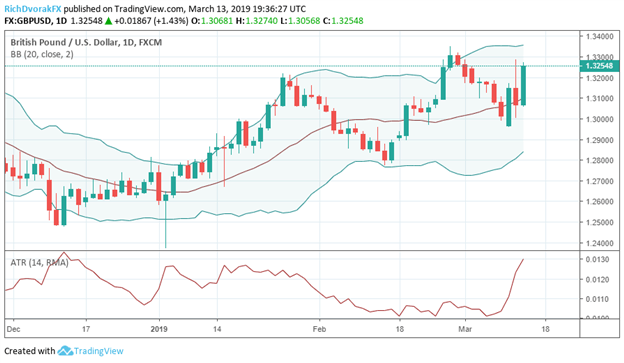 In response to increased uncertainty, however, rampant GBPUSD volatility has sent the cable’s ATR exploding back to its highest level since December in the days leading up to the PM’s historic defeat of her original Brexit deal. Tomorrow’s debate could bring about even more price action for the Pound considering the wide-range of possibilities regarding Article 50 – ‘for how long?’ being the biggest outstanding question. Speculation calls for either a short extension or a long one, but both face their own respective complications.

A short extension could see the March 29 Brexit deadline kicked back somewhere between one and three months. The issue with a short extension, however, is the possibility of Brexit negotiations materially interfering with elections in the European Union – something EU leaders have voiced concern over. On the other hand, a long extension that would push Brexit back around a year could increase the likelihood of a second referendum or general election. Consequently, PM May is expected to favor a short extension.

Regardless of the timeline decided by British Parliament tomorrow, the request needs to be approved in unanimity by the EU27. Prominent leaders of the EU have voiced skepticism over the UK’s need for an extension arguing that the government needs to simply make up its mind if it wants to leave the EU or not.

The PM took the House floor following today’s votes and stated that a short Brexit extension is only available if a deal is agreed upon seeing that renegotiating would require a longer extension. But, the EU has clearly pointed out that the deal on the table is and will be the only deal available.

As it stands now, the legal default remains with the UK crashing out of the EU without a deal. Nevertheless, if extending Article 50 does in fact pass the House of Commons tomorrow, the EU will likely discuss and decide to accept or reject the UK’s request at next week’s summit.