Overnight implied volatility suggests currency traders are gearing up for some extra GBPUSD price action tomorrow. With Prime Minister Theresa May’s brokered Brexit deal to get its second meaningful vote tomorrow, forex markets anxiously await the outcome of Brexit and its ultimate impact on the Sterling. 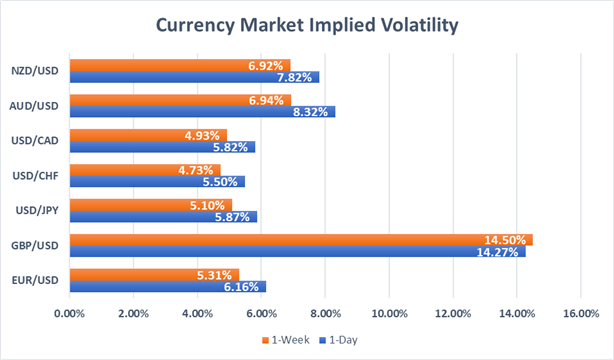 News that PM May is headed to Strasbourg for a face-to-face meeting with the European Commission’s leader Jean-Claude Juncker recently crossed the wire. The development has pushed the GBP higher with markets speculating that the EU may offer last minute concessions regarding the Irish backstop – one of the most controversial sticking points – which might be enough to push a Brexit agreement over the finish line.

Take a look at this Brexit Timeline for a chronological list of major developments.

A positive breakthrough could corral enough MP support to pass the PM’s deal ahead of tomorrow’s withdrawal debate and vote in the House of Commons. On the contrary, without additional legally binding assurances from the EU over Northern Ireland’s border, it becomes increasingly likely that UK Parliament will extend Article 50 and delay the March 29 departure deadline. 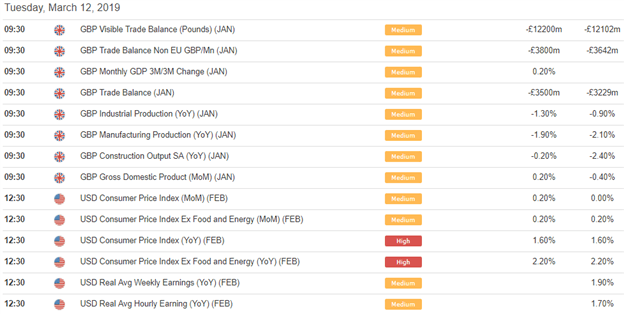 Additionally, a batch of UK economic indicators are scheduled for release and will provide the latest take on the impact of Brexit. Data has been surprising to the upside as of late and could reinforce Bank of England’s Mark Carney comment last week that markets are underestimating the probability of rate hikes. However, Brexit headlines breaking over the coming hours will likely dominate price action.