GBP: A choppy session to begin the week for GBP watchers with the currency on high alert ahead of the series of Brexit votes. Given that talks between the EU and UK look to have hit an impasse with regard to legal assurances of the backstop, and with little signs of a breakthrough before tomorrow’s vote, expectations are for PM May to face another large defeat. Consequently, GBPUSD edged below 1.30, before finding support ahead of the 1.2950 handle. As PM May’s deal looks to fail and with MPs unlikely to vote in favour of a no-deal, an extension to Article 50 looks increasingly likely.

NOK: The Norwegian Crown is the notable gainer in the G10 space following the latest inflation data, in which the Norges Bank’s preferred metric (CPI-ATE) rose to 2.6%, ahead of analyst estimates of 2.1% and above the central bank’s expectations of 2%. Consequently, this will likely embolden the case for the Norges Bank to be the only G10 central bank to hike in Q1. Investors now await the key regional network survey tomorrow.

TRY: USDTRY edged higher after Turkey fell into a technical recession with Q4 GDP contracting 3% (Exp. -2.7%). Consequently, this is likely to begin raising questions as to whether the Turkish Central Bank will continue to deliver a hawkish stance as growth continues to deteriorate. As such, USDTRY may continue to gain if President Erdogan calls for easier monetary policy after the local election (Mar 31st).

Crude Oil: Oil prices were given a modest boost as Saudi Arabia look to continue delivering sizeable cuts with reports suggesting that exports will be below 7mlnbpd in April, while output will be “well below” 10mlnbpd. This in turn saw Brent crude futures reach highs of $66.55, however, gains had been pared slightly amid reports from Libya, that they will look to restart production at their largest oilfield. 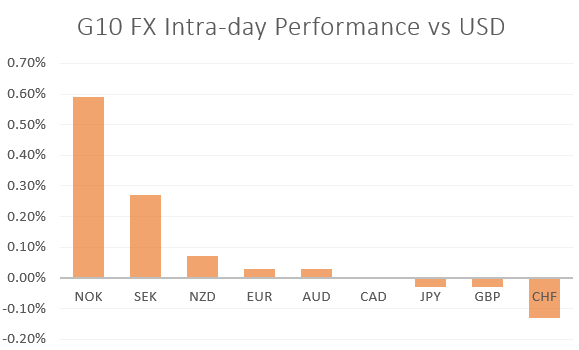