ECB Meeting Preview: EUR Price to Rise if There is no Mention of TLTROs

Markets focus on new round of TLTROs

The European Central Bank will likely announce today, Thursday, that it is keeping all its key interest rates unchanged and will almost certainly make no change in its forward guidance that rates will be left where they are “at least through the summer of 2019”.

That means traders should focus on likely lower economic growth and inflation forecasts and on whether the ECB statement at 1245 GMT, or the subsequent press conference by ECB President Mario Draghi at 1330 GMT, includes a reference to a new round of Targeted Longer-Term Refinancing Operations. If not, a rise in the Euro price could follow.

TLTROs are a way of providing cheap funding to banks to encourage them to boost economic activity by lending more and you can read more about them here.

Taking the ECB’s forecasts first, recent evidence suggests the Eurozone economy is weakening. The OECD inter-governmental think tank predicted Wednesday that GDP growth in the region would be just 1.0% in 2019, down from 1.8% in 2018 and below its previous projection of a same-again 1.8%. Its prediction for 2020 was lowered to 1.2% from 1.6%.

Earlier this week, the composite purchasing managers’ index for the Eurozone in February suggested the region would struggle in the first quarter to beat the sickly 0.2% expansion seen in the fourth quarter of last year. 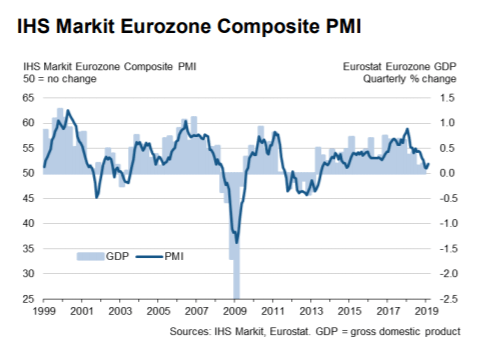 Arguably, however, this economic weakness is already priced in to the Euro price so instead traders should focus on whether the ECB signals a new round of TLTROs. No launch is expected to be announced before April or even June, with the ECB likely to be in “wait and see” mode until then – especially as the central bank’s asset-purchase program only ended in December.

Both are designed to loosen monetary policy, TLTROs doing so by injecting money into the financial system to boost growth and inflation. However, the markets are still expecting the ECB to signal that they are now on the agenda and a failure to do so would likely reverse the downtrend in EURUSD in place since the end of last month.

Either way, though, slower than previously expected GDP growth means the interest rate outlook is now bearish so a dovish shift by the ECB is likely eventually – making a downward move in the Euro a distinct possibility longer-term.