Retail sales figures came in well below expectations for January

None of this materially affects dovish monetary policy forecasts, which probably accounts for AUD’s modest moves on the data

January’s sales rose 0.1% on the month, below the 0.3% markets had expected. This was better than December’s 0.4% fall but still a lackluster reading for an economy so dependent on consumers for growth.

This number will do nothing to alter expectations that Australian interest rates are probably headed lower so AUD/USD’s modest slip should be no surprise. 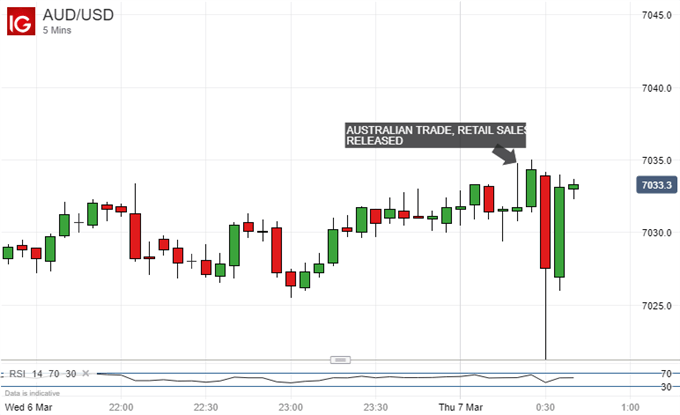 January’s trade balance was AUD4.55 billion, well above the 2.75 billion expected and a thirteenth straight month of surplus. Judging by these data the trade impasse between China and the US, and the general economic slowdown visible in many regions, has yet to significantly hit Australia’s exports, although weaker domestic demand may be flattering the figures.

February’s construction Purchasing Managers Index came in at 43.8 earlier Thursday. That was better than January’s 43.1 but still deep in the sub-50 territory which signifies overall contraction in activity.

On its daily chart the Australian Dollar languishes at two-month lows against its US big brother. The Aussie has long had to contend with a complete lack of interest rate support, with markets moving to price in a cut in the record-low 1.50% Official Cash Rate late this year.

Now weakness has been exacerbated by cuts to the Reserve Bank of Australia’s growth and inflation forecasts and a very weak official Gross Domestic Product reading for 2018’s final quarter. 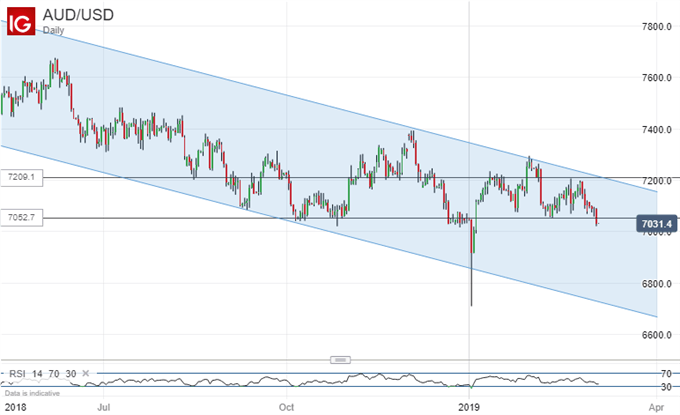 The downtrend channel which marked much of last year’s trade is now back and, for as long as the Australian Dollar lack interest rate support, a lasting upside break will be difficult.

However, a trade settlement between the US and China would probably spur at least a knee-jerk surge in risk appetite which would all-but certainly see the Australian Dollar make gains. This must be regarded as the gravest near-term fundamental threat to a rather bearish AUD/USD prognosis.