See how IG clients are positioned on the Dow, Crude oil and the US Dollar with our free IG Client Sentiment Data.

USDCAD is pressing higher after the Bank of Canada offered a dovish shift in language in their rate decision report. While the bank expectedly left its interest rate unchanged, dismal GDP numbers last week may have weighed on the bank’s outlook.

The rate decision report highlighted the recent slowdown experienced in the Canadian economy saying, “the fourth quarter slowdown was sharper, more broadly based than forecast.” Consequently, the bank found the economy in the first half of 2019 to be weaker than originally forecast. Together, the downward revisions worked to muddy the rate hike path and the bank noted the change saying there is “increased uncertainty about the timing of future rate increases.” 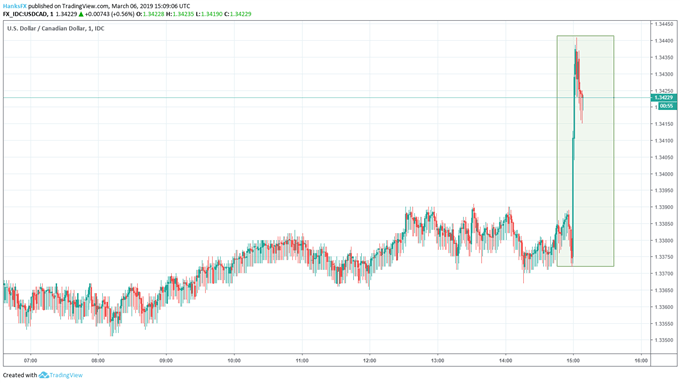 Given the greater uncertainty facing the bank, officials stressed data dependence moving forward. “Uncertainty about the pace of future rate hikes means the bank will be closely watching household spending, oil markets and global trade policy” officials said. The Canadian energy sector will continue to be a pivotal factor in Canadian rate hikes and the Canadian Dollar, as the bank highlighted the impact of cratering oil prices in their last rate decision. 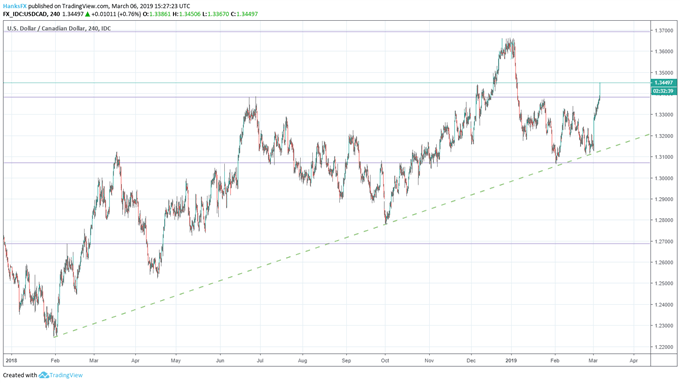 As for the broader outlook of USDCAD, the seemingly dovish tone helped to continue the move off support near 1.3122. After the report, the pair immediately traded higher to the 1.3440 range. Further, the greater uncertainty and data dependence highlighted by the Bank of Canada could provide a tailwind for the USD moving forward as the language is priced in to the market’s expectation of future rate hikes.