AUD/USD took a hit after Australia’s year-on-year GDP rate came in at 2.3 percent, undershooting the 2.6 percent forecast. This was the slowest rate of growth since Q2 2017. The Aussie’s downward move may have also been compounded by a revision of the Q3 GDP report from 2.8 percent to 2.7. 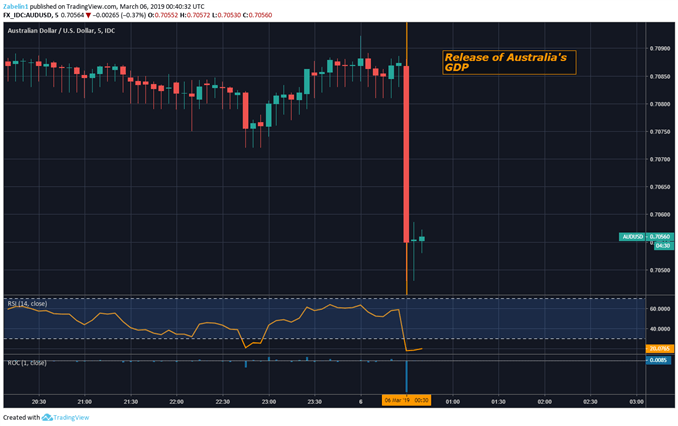 The underperformance in the data may prompt the RBA to shift its “balanced” outlook for monetary policy to more dovish. Anticipations of such a move can be interpreted through the plunge seen in Australian bond yields as the data crossed the wires. According to the Australian Bureau of Statistics, net exports detracted 0.2 percentage points from GDP growth as exports declined.

This may have been as a result of weaker demand from China. After all, the world’s second-largest economy is Australia’s top trading partner. China’s economy has been slowing, adversely impacted amidst the ongoing trade war with the US.

As the global economy slows and faces increasing risk out of Europe and uncertainty over the trade wars, the Australian Dollar may struggle to find upside momentum. Despite upbeat news on the state of negotiations between the US and China, AUD/USD and other business-cycle-tied assets have been relatively unresponsive.

This might be due to an underlying outlook that signals growth in the future may still be in danger despite a major breakthrough in US-China relations. Looking ahead, AUD/USD may be vulnerable to event risk coming out of the US with this week’s employment data scheduled to be released on March 8. Additionally, on Saturday, China will release its CPI report and Fed Chairman Jerome Powell will be giving a speech.