AUD: The Aussie had been delivered a fresh blow after the Q4 GDP missed analyst estimates (0.2% vs. Exp. 0.3%, Y/Y 2.3% vs. Exp. 2.5%), which makes the RBA’s 3% 2019 growth forecast look increasingly optimistic. Consequently, the softer figure prompted money markets to bring forward expectations of a rate cut (fully priced by October). In turn, AUDUSD tripped through 0.7050, while AUDNZD edged towards the Jan 3rd flash crash low at 1.0354. Although, following yesterday’s commentary from RBA Governor Lowe that the labour market is the central ingredient to boost consumption, eyes will be on the upcoming labour market reports, in particular the unemployment rate.

CAD: Ahead of today’s BoC decision, CAD continues to weaken across the board with USDCAD eying psychological resistance at 1.34. The shift in sentiment towards the Loonie has largely been due to the soft GDP data last week, with many speculating that this could alter the BoC’s stance. However, as a reminder, the BoC had already noted in the Jan MPR that growth was likely to deteriorate in Q418 and Q119, as such, the recent GDP report may not be enough to lead to a shift in language, given that inflation continues to hover around the central banks target. Although, if indeed there is a shift, USDCAD could see a move towards the top-end of 1.34. For CAD technical levels, click here

TRY: The Turkish Lira had briefly strengthened following the rate decision, after the CBRT had reaffirmed their independence, having maintain their tightening stance in order to bring down inflation. However, with focus on the economic outlook for Turkey, the initial TRY strength had quickly reversed before moving lower, on the view that the central bank could face increasing calls to ease policy, given that current tight conditions continue to dampen growth, as indicated by the recent Q4 GDP report, which showed a contraction of 2.7%. Next up for TRY watchers, will be on the upcoming local elections. 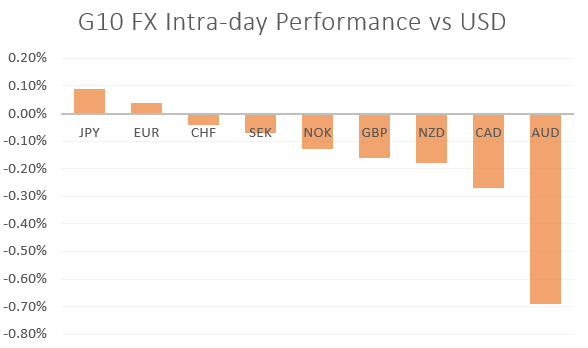