GBP overnight implied volatility nearly doubled from 5.59 percent to 10.39 percent ahead of key event risk. This suggests sterling will trade between 1.3101 and 1.3245 – its widest range since January 29. The UK’s Purchasing Manager Index is scheduled to be released at 9:30 GMT tomorrow, but eyes will be on Bank of England’s Mark Carney who testifies to the House of Lords at 15:35 GMT and will likely provide some remarks on Brexit.

Unsure of the GBP’s next direction? Check out the GBP Forecast by DailyFX for free!

Despite the rise in implied volatility for GBP, a British official stated today that there is a negligible chance Parliament votes on the Prime Minister’s Brexit deal this week. 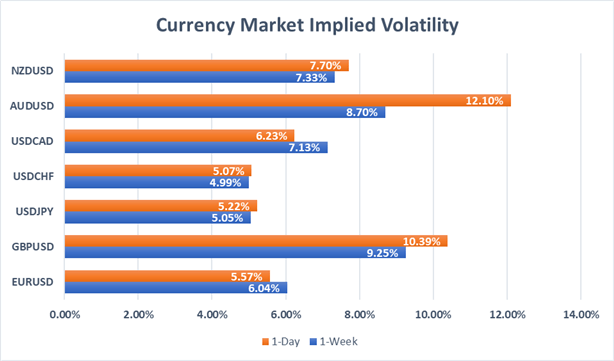 AUD overnight implied volatility leapt from 4.88 percent to over 12 percent as currency traders await the Reserve Bank of Australia’s interest rate decision and the country’s economic data. Although the central bank is largely anticipated to leave its policy interest rate unchanged at 1.50 percent, language from RBA Governor Philip Lowe will be scrutinized as markets try to gauge the future direction of policy. Weaker than expected data reported on Australian corporate profits at the start of today’s session also soured sentiment for the Aussie Dollar and could have bid up AUD hedging costs. 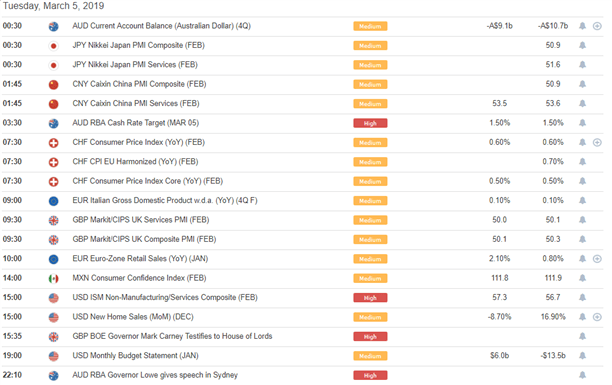 Likely contributing to the widespread uptick in implied volatility for the selected currencies is from the option market pricing additional USD risk in response to President Trump who reignited his attack on the Federal Reserve for raising interest rates, adding that the US Dollar is too high. Today’s anti-risk mood which caused a knee-jerk selloff in equities could have also contributed to heightened expectations for upcoming price action.