The Australian Dollar will be keeping a close eye on China’s upcoming manufacturing PMI release. The data is scheduled to be published on February 28 at 01:00 GMT. Current forecasts are pegged at 49.4 with the previous at 49.5. The economy has only recently been outperforming relative to economists’ expectations, but not by a substantial margin and the outlook still remains uncertain. 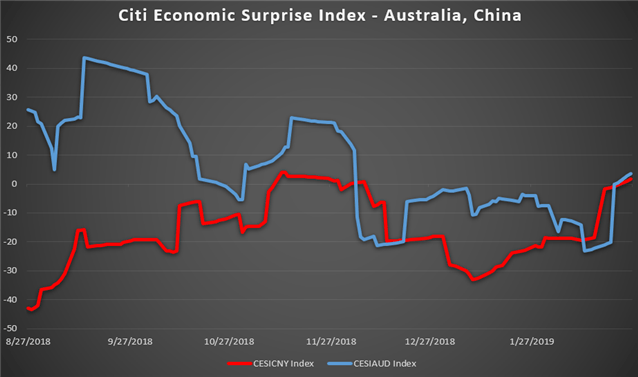 In addition to concerns of slower growth and rising corporate default rates, the exact outcome of the trade negotiations remain unclear. Despite Trump tweeting on Sunday his plan to postpone the tariffs on $200 billion worth of Chinese goods, issues over technology and IP remain at the core. On the same day, China’s state-run agency Xinhua also announced that there may be greater friction as the two sides approach a deal.

The impact of the US-China trade dispute has weighed on RBA policymakers, with Governor Philip Lowe recently announcing that the central bank does not see ‘a strong case for near-term adjustment’. Other comments also revealed that the outlook is ‘more balanced’, signaling that the probability of a cut is now relatively equal to the possibility of a hike.

Looking ahead, Aussie traders will be watching China’s Caixin PMI report on Friday along with Fed Chairman Jerome Powell’s speech on economic challenges and the outlook for the US economy. If in his speech he hints that growth may be slower and downside risks are swelling, it could weigh on sentiment and push the cycle-sensitive Aussie down.

Since February 11 AUD/JPY has been trending higher and appears to be coming closer to the 79.899 resistance. This comes despite the setback on February 21 when a major Chinese port announced it was putting a ban on importing Australian coal. Assuming Chinese PMI data comes in higher than expected, depending on the magnitude, it could push the pair beyond 79.899. 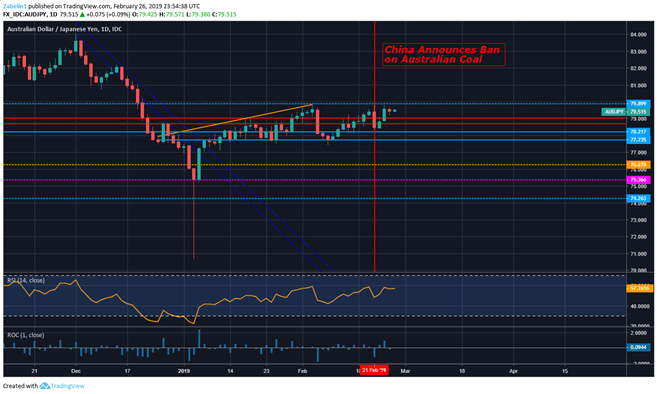 However, waiting for confirmation above this line is key. It could very well dip below it the following day. For the time being, the trade war issue is on the back burner but will continue to linger in the background until a final non-ambiguous deal is reached. But even then, will it be sufficient enough to give investors an optimistic outlook for global growth in 2019?