The metric’s rebound reverses the sharp drop witnessed in last month’s Consumer Confidence Index and indicates a widespread recovery after three consecutive months of declines. Consumers’ appraisal of current conditions, optimism about the short-term future, and outlook for the labor market all showed signs of improvement according to the report.

Take a look at IG's real-time Client Sentiment tracker to see the bullish and bearish biases of traders here!

Seeing that the sentiment-driven survey provides a snapshot of current business conditions and expectations in addition to consumer attitudes and buying intentions, stocks began to march higher in response. 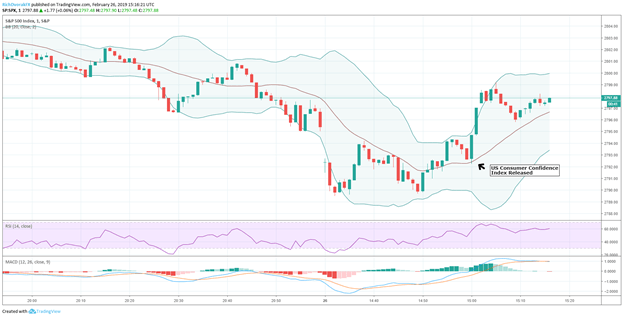 February's Consumer Confidence Index echoes the returning optimism that recently flooded markets and seems to have drowned previous concerns over slowing global growth in addition to several other risks that dominated investor minds only weeks ago.

But, it appears that the worst may be in the rearview mirror – at least for now – seeing that the US government narrowly avoided another prolonged shutdown and President Trump announced he will extend the March 1 deadline that was set to escalate the trade war by raising tariffs on Chinese goods from 10 percent to 25 percent.

As these risks begin to fade, consumer confidence may continue to rebound and reflect the recovery of equity prices. Further price action in response to the Consumer Confidence Index is likely to be muted, however, as Federal Reserve Chairman Jerome Powell is delivering the semi-annual testimony to the Senate Banking Panel which looks to steal the spotlight.