See how IG clients are positioned on the Dow, Crude oil and the US Dollar with our free IG Client Sentiment Data.

The stock price of Apple will pay close attention to news out of the United States and China as the two countries work toward a trade war resolution. The Cupertino, California – based company has been pressured in recent months as China derived revenue took a hit from the US-China trade war and broader economic growth concerns in the country.

The company delivered a clear warning at the start of the year which tipped volatility in broader markets as well as a flash crash in the Japanese Yen and Australian Dollar. For its own performance, Apple’s share price has suffered and its ratio to the FAANG group responded accordingly. 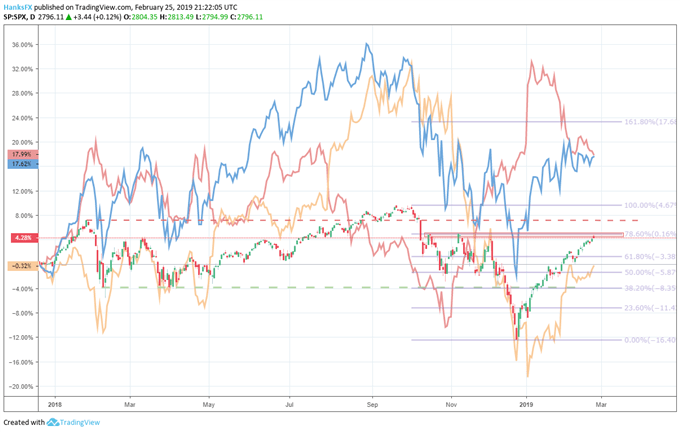 FAANG shown in blue, FAANG’s ratio to Apple denoted in red. AAPL in Orange. Overlaid on the S&P 500.

However, the recent trend may be headed for the door if the US and China agree to a trade deal or lowering of tariffs. Of the high-profile FAANG members, Apple derives the largest share of revenue from outside of the United States. As for China specifically, the country was responsible for nearly $52 billion of Apple’s revenue in the most recent fiscal year. Compared to Apple’s total revenue of approximately $260 billion, China derived revenue accounts for roughly 20%. 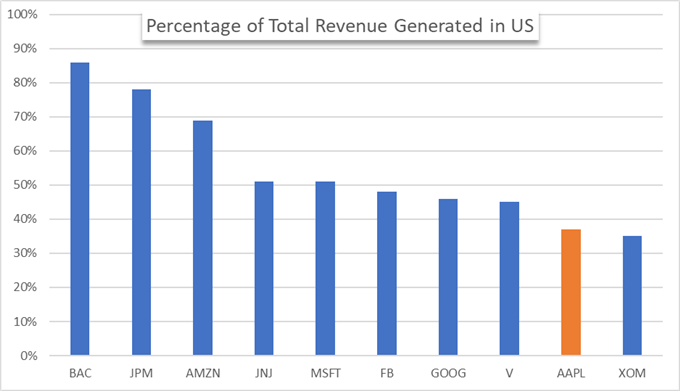 With a non-insignificant portion of Apple’s revenue dependent on China, a possible trade war resolution should spur the share price of a company that was recently the world’s largest. In turn, a newfound bullishness from Apple, often viewed as a stock market bellwether, may offer new fuel to the recent rally in the S&P 500. That said, there are some considerations to be made. 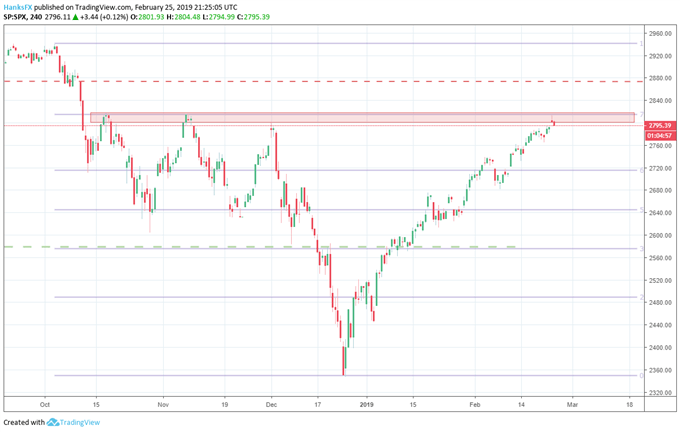 The S&P 500 gapped higher on Monday after a trade-war truce extension was announced by President Trump. The extension served to push back the trade ceasefire from March 1st to late March and provide US and Chinese negotiators more time to iron out the specifics.

However, as the session progressed the impact of trade optimism waned, and the S&P 500 closed marginally higher, up 0.12%. Likewise, Apple was able to cap a 0.75% gain. But a retracement of the session’s earlier gains raises concerns that the S&P 500 has already priced in the trade war truce. Thus, concrete terms or another bullish spark, may be needed to spur the index through the area of technical resistance. Such a spark could be delivered by Fed Chairman Powell’s testimony tomorrow.