The Australian and New Zealand Dollars made early gains Monday, while the haven Japanese Yen lost ground on news of apparent progress in trade talks between China and the US.

US President Donald Trump said via his Twitter feed that he would be delaying the tariff increase initially planned for March 31 thanks to ‘very productive’ trade talks between the two countries. According to wire reports he also said that a summit with his Chinese counterpart Xi Jinping could be on the cards if more progress is made. There have been positive steps on intellectual property, technology, agriculture and currency policy, the US President said.

With so many global economic indicators looking patchy at best, a trade fillip from this direction couldn’t be better timed. Trade snarl-ups rippling out from the US/China impasse have hit countries well beyond the two main players.

Growth sensitive currencies got a clear immediate boost, with perceived havens such as the Japanese Yen put under pressure.

AUD/USD provides a good example of the general trend, gapping higher on the news. 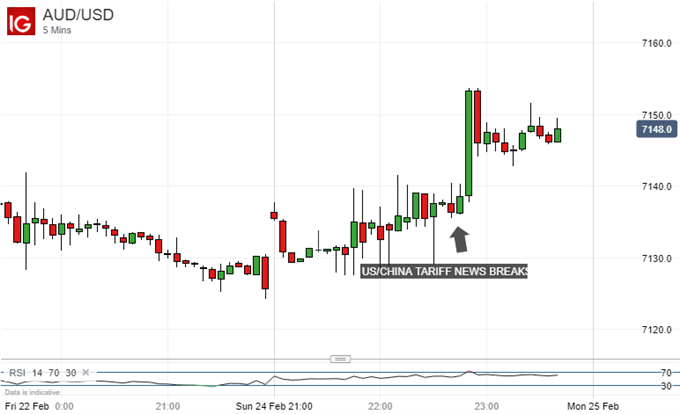 Markets will now await further details, with trade headlines likely to retain the ability to override all other concerns as this week’s trading progresses.