After an impressive local jobs report, AUD/USD suddenly tumbled about 0.9% on a report from Reuters that China’s Dalian port banned Australian coal imports to a level not to exceed 12m tons this year. According to the report, this is to last indefinitely. In addition to China being Australia’s largest trading partner, coal is one of the nation’s key export. This could have a consequential adverse impact on the economy after global conditions are already looking dim. China’s economy is slowing alongside major nations in Europe. 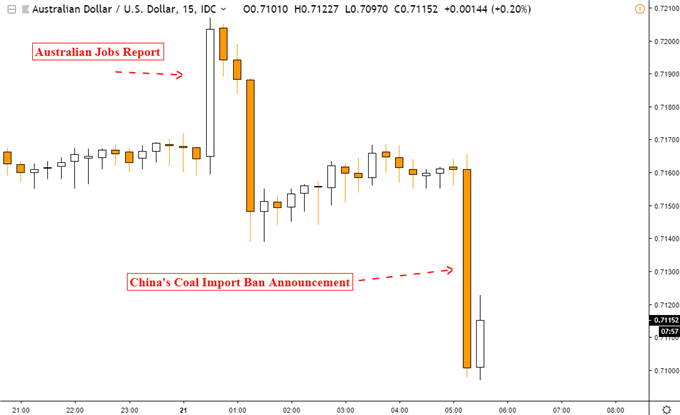 Most Asia Pacific benchmark stock indexes traded higher following gains on Wall Street after the FOMC meeting minutes revealed that policymakers could halt the runoff in the balance sheet later this year. During Thursday’s APAC session, equities received a further boost when reports crossed the wires of progress in US-China trade talks.

The two nations are forming six Memorandums of Understanding addressing items such as agriculture, intellectual property and services. In addition, efforts are being made to extend the March 1 deadline before the US could raise tariffs on Chinese imports. These headlines appeared to fuel sentiment as regional bourses aimed higher.

Japan’s Nikkei 225 climbed about 0.4% heading into the close, extending gains after a breach above critical resistance barriers. Australia’s ASX 200 soared 0.70% as it kept making upside progress in the aftermath of a bullish reversal pattern from the beginning of this year as expected. China’s Shanghai Composite climbed roughly one percent as the KOSPI was little changed.

Ahead, markets will be eyeing US durable goods orders given the data-dependent stance at the Fed. Slowing retail sales growth last week produced a market-wide risk averse reaction in equities. Meanwhile, the Indonesian Rupiah awaits a central bank rate decision. Keep an eye on what they have to say about the fundamental value of their currency.