After US markets were offline and a slight dose of risk aversion was added, Asia Pacific benchmark stock indexes traded mixed. The Nikkei 225 and ASX 200 saw gains ranging above 0.2% as we headed into Tuesday’s close. China’s Shanghai Composite was relatively flat while South Korea’s KOSPI aimed about 0.3% to the downside.

Looking at foreign exchange markets revealed a somewhat ‘risk-off’ trading dynamic. Both the sentiment-linked Australian and New Zealand Dollars traded lower against their major counterparts. As anticipated, the RBA meeting minutes ultimately sent AUD/USD to the downside as the central bank offered more details to their increasingly neutral policy outlook. This is as opposed to favoring a hike down the road.

While the anti-risk Japanese Yen was higher, gains were trimmed on dovish commentary from BoJ’s Governor Haruhiko Kuroda. This also offered a slight boost to the Nikkei 225. Looking ahead, S&P 500 futures are pointing narrowly lower. The upcoming German and Eurozone ZEW sentiment surveys may disappoint, fueling risk aversion and presenting knock-on effects for ASEAN currencies as the US Dollar appreciates.

These next few days will be quite interesting for the S&P 500 if sentiment ends up prevailing instead. Ahead lays a range of resistance between 2785.93 and 2816.94. Should this be cleared, it could set itself up for paring losses from its dramatic plunge towards the end of 2018. Should it turn lower in the interim, near term support appears to be a rising trend line from January. 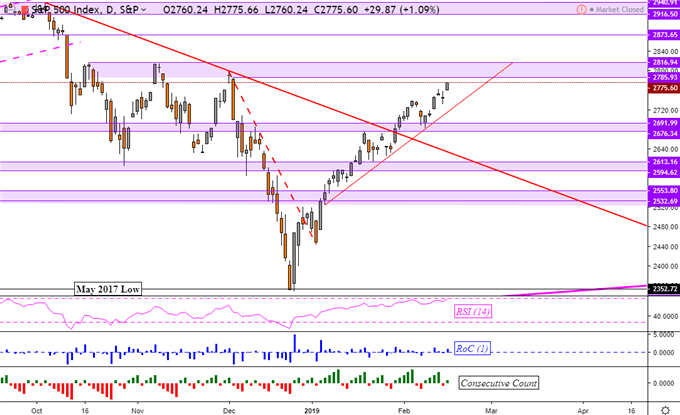