The latest look at the UK labour market showed 167k new jobs created in Q4 3m/3m, beating expectations of 152k and a prior reading of 141k, while the UK employment rate remained at a record high with vacancies also hitting a new record. Wage growth, ex-bonus, remained stable at 3.4%, while the employment rate was also unchanged at 4%. Figures last week showed UK inflation falling back to 1.8%, meaning UK consumers are still seeing a boost in real incomes, despite Brexit fears.

According to recent media reports, European Commission President Jean-Claude Juncker said that the EU may be willing to delay Brexit for a few months if it prevents a No Deal scenario. The report, in German newspaper Stuttgarter Zeitung, said that if the UK requested the delay, the EU would not oppose it although they have no time frame in mind as, according to Mr. Juncker, ‘with Brexit, so many timetables have already gone by the wayside’. For PM May to be able to sell this delay to both the EU and the Conservative Party, she must be able to show that a deal is possible on the Irish backstop, and that this deal would command a majority in the House of Commons. Brexit Secretary Stephen Barclay will continue discussion in Brussels today.

GBPUSD remains above 1.2900, despite the US dollar clawing back some of Monday’s losses, while the British Pound continues to make small gains against a range of other currencies. GBPUSD is currently just under resistance at 1.2940, the 200-day moving average, with a break and close above here opening the way to 1.2990 – 1.3020 in the near-term.

Sterling Starting the Week in Positive Fashion on Brexit Rumors 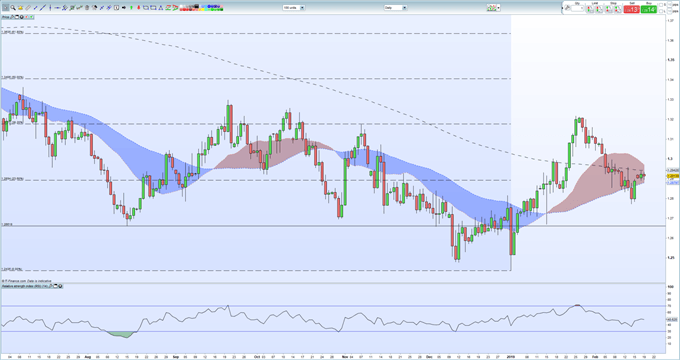 IG Retail Trade Data shows 64.9% of traders are net-long – a bearish contrarian indicator - with the ratio of traders long to short at 1.85 to 1. However, the combination of current sentiment and recent changes gives us a mixed GBPUSD trading bias.