In recent weeks, the Euro has continued to hover around the lower bound of its 1.12-1.16 range, having last week hit lows of 1.1235. In light of the slowdown in the Eurozone, particularly stemming from Germany, ECB officials have provided a cautious rhetoric, with the talk of potential TLTROs being used in order to ease downside pressures. Alongside this, the ECB’s Chief Economist highlighted that staff projections were likely to be downgraded at the March 7th rate decision, while rate guidance could be adapted (potentially extended) if the Euro Area were to slow more sharply. As it stands, money markets attach a 42% chance of a 10bps rate hike by the year-end. Amid the persistent moderation in Eurozone growth, German bund yields have continued to drop with the 10yr at 0.1%, a move to negative territory may provide a downside break of the range that EURUSD has held since October. 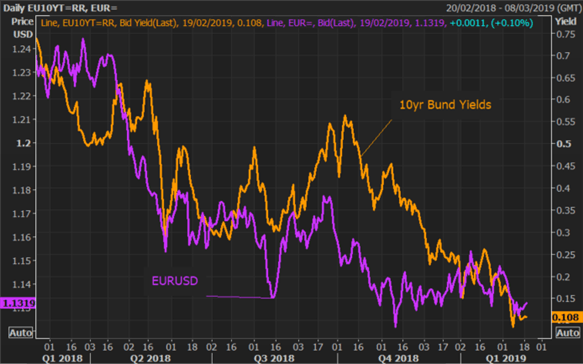 Another cause of concern for the Euro is the potential introduction of EU auto tariffs. On Sunday, the US Commerce completed their investigation into whether EU autos and parts pose a threat to national security. So far, details of the findings have yet to be disclosed, while President Trump has until May 20th on whether to impose tariffs. If tariffs were to be invoked, German autos would feel the largest impact from the decision, consequently, weighing on the Euro and the DAX. 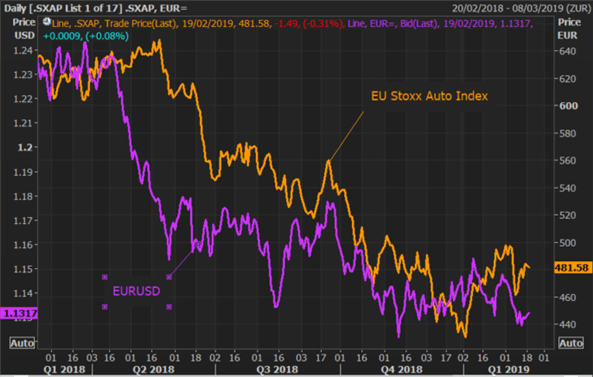 Among the factors that may come to the rescue for the Euro is the recent breakdown in correlation with US/DE rate differentials. While this continues to remain in favour for the USD, the spread has noticeably tightened since the peak seen in Q4 2018. Convergence could provide support for the Euro relative to USD. 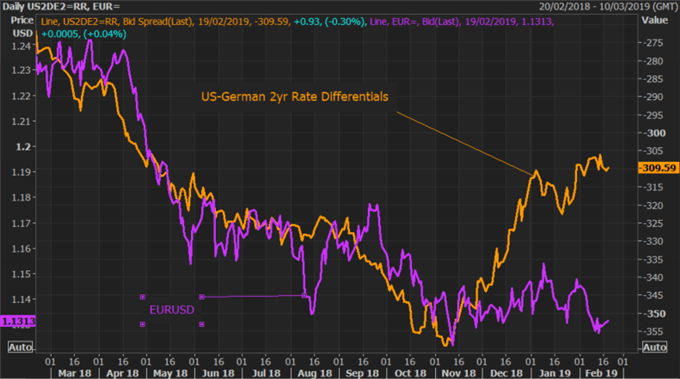