The Euro may slide if Germany’s ZEW Survey – a measure used to gauge the expectation for economic growth – falls short of the already-negative 13.6 forecast. The currency may also face additional downward pressure if Italian industrial orders data indicates growth is weaker than expected. Because Italy is in a technical recession, every underperforming report will likely only compound risk aversion toward Italian assets.

Doubt over the underlying strength in the Italian economy – and European growth – is seen by the spread between Italian and German bond yields. Since April, the spread has widened over 100 percent, especially during the battle of budgets between Rome and Brussels. 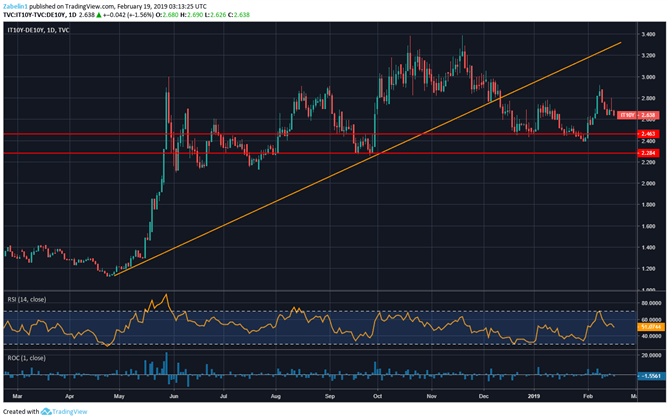 However, even though German bonds are generally viewed as an anti-risk asset, recent data has revealed that not even the steam engine of European growth is immune. Seasonally adjusted quarter-on-quarter GDP came in at 0.0% percent, undershooting the 0.1 percent forecast with the previous at -0.2 percent. If the German economy contracted, it would have then satisfied the technical definition of a recession.

Or to put it another way, two out of the three largest Eurozone economies would each be experiencing a contraction for two consecutive quarters, with France not far behind.

Adding fuel to the fire, Lega Nord lawmaker – one of Italy’s ruling populist parties – sent Italian bond yields higher on Friday after he threatened Italy’s membership in the Eurozone. “[E]ither we succeed in changing Europe now or we will have to leave”, referring to the upcoming European Parliamentary elections in the spring. Eurosceptic and anti-establishment parties are gaining momentum as the voting day approaches.

Even though such comments from him are not unusual, markets appear to be more skittish on potential triggers that could further weigh on the outlook for growth in the EU. This primarily has to do with the ever-increasing fragility of European affairs – politically and economically.

Looking ahead, this week Eurozone manufacturing PMI, CPI and other typically market-moving data will be released and will likely impact EUR/USD. The ongoing Brexit negotiations is still a major risk factor with fears of a potential reignition of a US-EU trade conflict rising.

EUR/USD may – depending on the magnitude of the reports – flirt with 1.1269. However, a potential counter-boost may be Wednesday’s release of the FOMC meeting minutes. If the text shows a strongly dovish disposition from the Fed, it may exert downward pressure on the US Dollar and push the pair higher. Leading up to these major releases, the pair might tread water as investors hold their breath and wait for the outcomes. 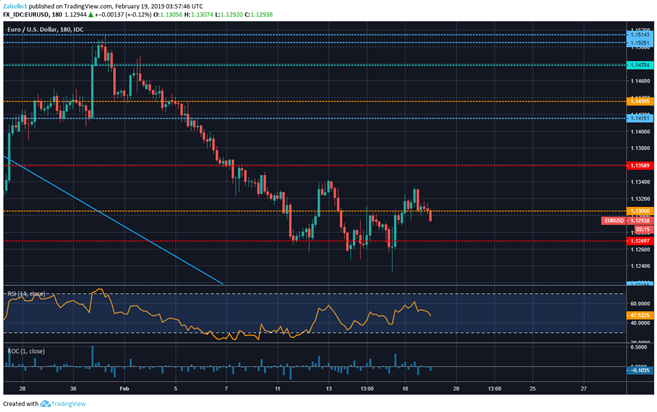