Asian stocks made broad gains as a new week got under way on Monday with hopes for a trade settlement between China and the US still working their magic on the markets.

Talks on the subject will now move to Washington DC after last week’s round in Beijing. Both parties have reported progress, with President Donald Trump telling press at the White House that an agreement was closer than ever before. He also raised the possibility that the March 1 deadline for the imposition of new import tariffs could be extended.

This elevated mood was enough to see all major Asia Pacific indexes higher through Monday. A lack of economic news and the looming US President’s Day break probably kept something of a lid on trade, but the Nikkei 225 added 1.8% by the middle of the Tokyo afternoon, with Shanghai and Hong Kong up by similar amounts. The ASX 200 and Kospi were both up by 0.4%.

Trade hopes put a floor under other riskier, growth-sensitive assets, with the the likes of the Australian and New Zealand Dollars reaping the benefits at the expense of the Japanese Yen and the greenback in Asian hours.

NZD/USD has managed five consecutive sessions of gains and is now knocking on the door of the uptrend which it abandoned earlier this month. 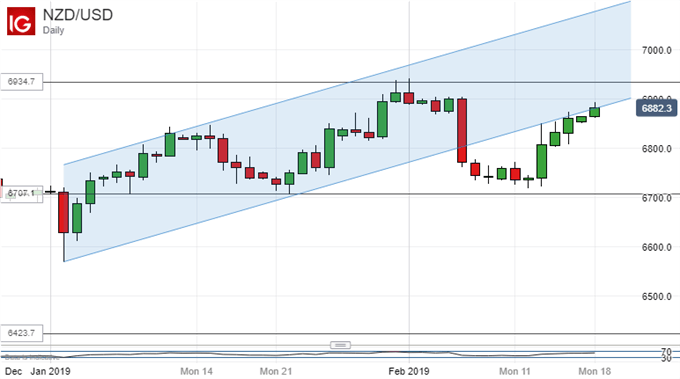 Gold prices remained underpinned too, however, and crude oil prices continued to rise on expectations of reduced supply from traditional producers.

The US holiday is likely to depress action for the rest of the trading day. There’s certainly nothing of likely interest on the international data calendar.