The Australian Dollar faded a little Friday on news of more economic weakness out of China, this time in the form of inflation data.

The official Consumer Price Index rose by 1.7% on the year, below the 1.9% expected. Producer prices added just 0.1%, even worse than the 0.3% forecast. This feeble outturn will cast fresh doubt on industrial profitability.

The Australian currency often acts as the markets’ favorite liquid China proxy thanks to its home nation’s huge economic ties to the world’s second-largest economy. It seems to have done so Friday, albeit to a limited extent, with a slip seen in the aftermath of the Chinese data. 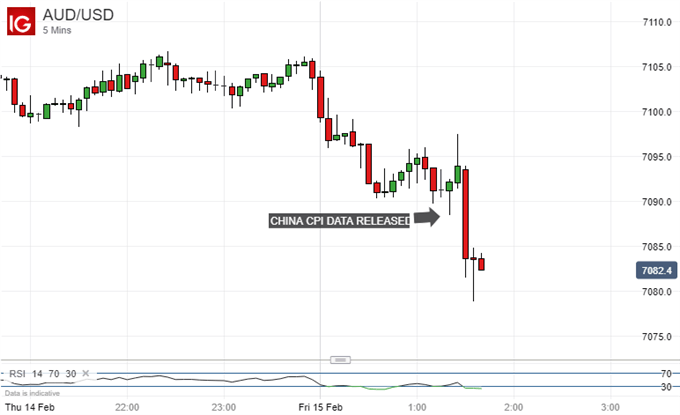 This seems to have been a move lower on the face-value point that weaker inflation flags broader economic problems. But investors may be ignoring the possibility that what it could mean in the end is more stimulus from Beijing. That usually sees the Aussie catch a bid.

Still, it is possible that the Chinese Lunar New Year break will distort figures in the early part of the year, but the initial market reaction would seem to indicate that worries about the Chinese economy do run quite deep in this market now.

Even allowing for this slip, the Australian Dollar has certainly had a calmer week this week after the hiding it suffered last. That came in turn as the Reserve Bank of Australia announced what amounted to a turnaround in interest rate guidance. It said that the record-low Official Cash Rate could yet go lower, when previously it had suggested that a rise was the most likely next move. The central bank also revised its growth and inflation forecasts sharply lower.

Still, global risk appetite has held up quite well as investors look with hope to trade talks between the US and China- a settlement here is probably the key risk to the bearish-China trade. These hopes remain fragile, of course, but they have also supported the growth-sensitive Aussie and kept it above the downtrend channel which dominated last year’s trade. 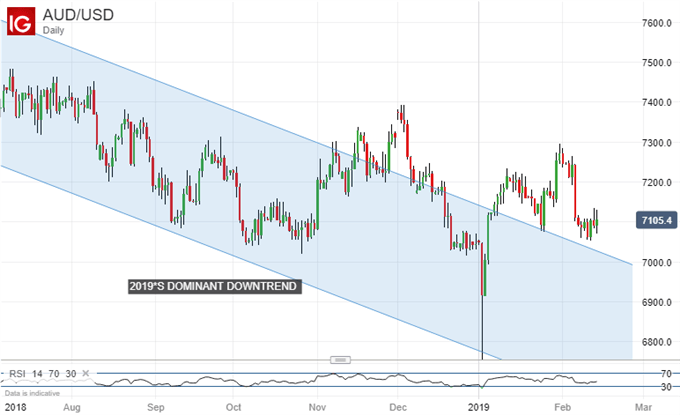 Still, reprieve may only be temporary for Australian Dollar bulls. That complete lack of interest rate support is bound to act as a considerable brake on any upward forays.