Most Asian Stocks Weaker On US Retail Shock, Trade Talks In Focus

Asian stocks were always likely to struggle Friday given that they had to follow Wall Street’s gloomy Thursday which came in turn on the back off very weak US retail sales.

They fell by 1.2% on the month in December, the biggest monthly collapse since September 2009, sending Stateside equity lower. There was some patchy regional news too in the form of Chinese inflation which missed expectations at both the consumer and factory-gate levels. There may have been some holiday distortion in these figures but, taken with other recent softer numbers, they seem to have been taken by investors as more bad news out of China.

Markets are still of course watching for any trade headlines from the US/China meeting currently taking place in Beijing, but risk appetite took a knock even so.

Crude oil prices hit their highs for the year thanks to supply cuts from OPEC.

The ASX remains well-within its established uptrend, and above its former trading range. 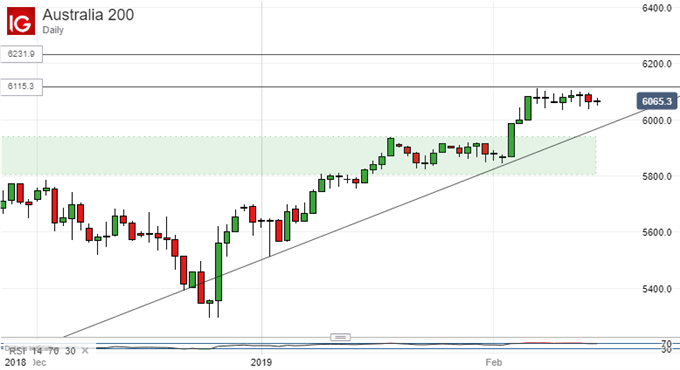 However, it remains well short of its most pressing resistance level, which is proving a tough nut for bulls to crack. If they fail to do so soon then the index could be in danger of topping out.

The US Dollar edged lower against the Japanese Yen, but made gains against its Australian cousin which wilted initially after those Chinese inflation figures. Gold prices, meanwhile, got their customary risk-aversion lift.

The day’s remaining economic data highlight will probably be the University of Michigan’s venerable US consumer sentiment snapshot, but it’s not alone on the docket. News of US industrial production is coming up too, along with import and export price figures for January. Before all that, investors will get a look at official UK retail sales numbers