British Prime Minister Theresa May suffered an expected defeat in the House of Commons Thursday as the Brexit deadline draws ever closer. Britain is scheduled to leave the European Union on March 29th (in 43 days) but with the recent lack of progress, speculators are growing increasingly concerned a comfortable exit is possible.

Thursday’s vote was further evidence of political gridlock between members of Parliament and the UK government. Although the outcome was expected, the failed vote adds another to a growing list of defeats for Theresa May.

The most notable vote on Thursday, a motion to back Theresa May’s Brexit strategy was defeated 303 to 258. While the vote is not binding on the government, the motion was seen as an attempt by May to buy more time to secure concessions from the EU. Prior to the vote, Theresa May implored members of Parliament to back her motion and send “another clear message” to Brussels that the UK needs changes to the deal.

Shortly after the vote, which Prime Minister May did not attend, her office released a series of comments: “voting against the government makes a no-deal Brexit more likely” and that the “government would still pursue backstop changes.” The failed motion and subsequent comments from May’s office signify the firmed battle lines on each side and lack of room for movement. 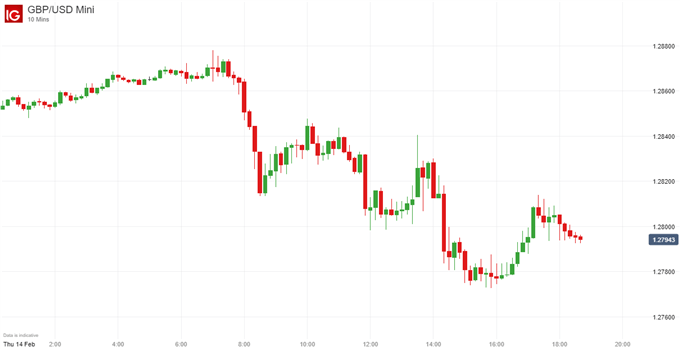 The Pound traded slightly lower following the defeat but within the day’s range, largely because the outcome met expectations. As for the road ahead, PM May will now attempt to garner concessions from Brussels, but many analysts believe the effort to be a fruitless affair. Should her attempt fail, and no deal is provided, February 27th looks to be the next key vote in which Parliament may vote to extend Article 50 under the Cooper Amendment.

Read more: DailyFX Poll: Which Successor to PM May Would be Most Positive for GBP?