Asia Pacific benchmark stock indexes traded rather mixed on Thursday despite notable events that inspired a ‘risk on’ environment in foreign exchange markets. After a mixed session on Wall Street, Chinese trade data surprised to the upside. This was then followed by news that the US is said to weigh a 60-day extension for the March 1 deadline when the country is expected to impose additional tariffs on China.

Japan’s Nikkei 225 was only up about 0.1% heading into the close. This was largely thanks to declines immediately after gapping higher at market open. Prices then slowly traded higher which was generally the case for most other equities. China’s Shanghai Composite aimed 0.32% higher while Australia’s ASX 200 was little changed.

Looking at currencies, the pro-risk Australian and New Zealand Dollars were some of the best performers. Meanwhile, the anti-risk Japanese Yen and haven-linked US Dollar underperformed. Ahead, S&P 500 futures are pointing little higher hinting that more optimistic trading is yet to come. This may fall apart if upcoming German GDP data disappoints. In addition, the S&P 500 is notably at risk to a reversal.

Australia’s ASX 200 has been struggling to clear immediate resistance at 6,102 (September 7 low). This comes after pushing above a horizontal barrier between 5,942 to 5,911. If the former holds and the index turns lower, prices may pause their descent on the latter. If 6,102 is cleared on the other hand, the next area of resistance appears to be 6,230. 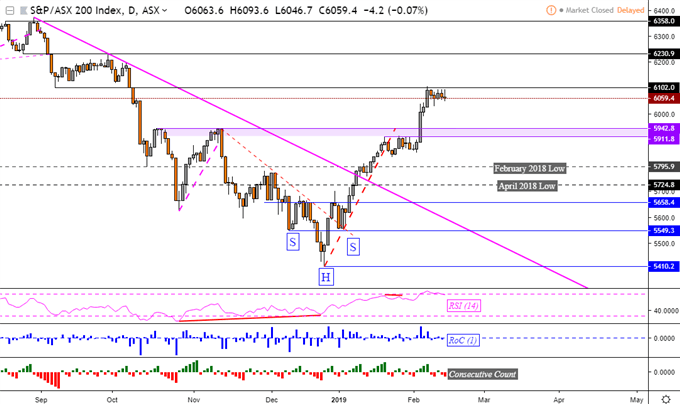