- Headline January US CPI beats expectations at +1.6% y/y, as did the core CPI reading at +2.2% y/y; the headline inflation was unchanged month-over-month.

- Disinflation in headline inflation may continue: the US Dollar is near its yearly high and energy prices have traded sideways in recent weeks.

- The US Dollar rallied following the release, following on with earlier news that US President Donald Trump will sign a new budget to avoid a government shutdown at the end of the week.

We’re getting through the halfway mark for the week and the first batch of significant US economic data due out in recent days is helping underpin a recovery in the US Dollar. Headline January US CPI beat expectations narrowly, coming in at +1.6.2% from +2.5% previously (y/y). With average hourly earnings in at +3.2% y/y, real wage growth continues to trend positive in the United States for the sixth consecutive month. The annualized core inflation came in at +2.2% y/y as expected.

The inflation data arrive at a time when the fundamental winds appear to be shifting around the US Dollar. After weeks of negative attention in between December and January – fears over the US government shutdown, the US-China trade war, the collapse in energy prices, and the resultant slowing of the economy – newsflow around the greenback is starting to become more positive at the margins. On the inflation front, for example, even if disinflation persists, that price pressures aren’t receding as fast as previously expected may be seen as a positive development in policymakers’ eyes.

Also helping provide a lift to the US Dollar this morning was news that US President Trump would be moving forward to sign the budgetary agreement reached between Congressional Democrats and Republicans. Lifting the uncertainty of another shutdown and limiting the collateral damage to the economy helps remove a big obstacle for the Federal Reserve in 2019. 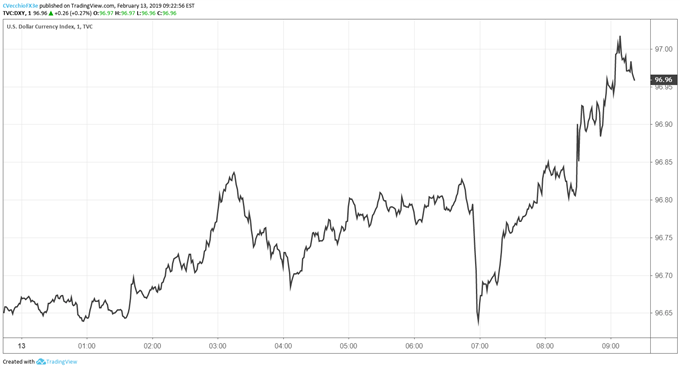 Following the inflation report, the US Dollar (via the DXY Index) continued its intraday uptrend, piggybacking on the news that a US government shutdown would be avoided. The DXY Index initially rallied from 96.81 to as high as 97.03 following the release, but was trading back higher at 96.96 at the time this report was written.