NZD Spikes Despite Quite Dovish RBNZ. Rates Remain On Hold

The New Zealand Dollar rose Wednesday after the Reserve Bank of New Zealand left its Official Cash Rate on hold at 1.75%. The rate has been unchanged since November 2016.

The RBNZ said it now doesn’t see any rises in interest rates until 2021, although it said the next move could be ether up or down. It also said that unemployment in the country was probably close to its maximum sustainable level.

Given that, it is hard to see quite why NZD/USD reacted as bullishly as it did, with the possibility that markets were braced for even more dovish commentary than they got one possible explanation – and indeed the only likely one to emerge so far. AUD/USD spiked at the same time.

Cleveland Federal Reserve President Loretta Mester did cross the wires at about the same time with the view that US rates were probably close to neutral. This might have weakened the US Dollar a little although there was little evidence of this in other currency pairs. 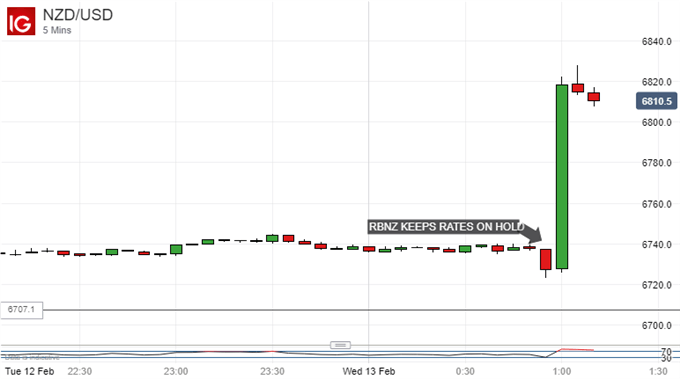 On its daily chart NZD/USD has broken below the uptrend channel which marked 2019’s trade until last week. The US Dollar took an early hit as investors adjusted to a more cautious rate-raising path from the US Federal Reserve. However, other central banks appear to have joined it, most notably perhaps the Reserve Bank of Australia which last week admitted that its own OCR could yet fall from record lows. 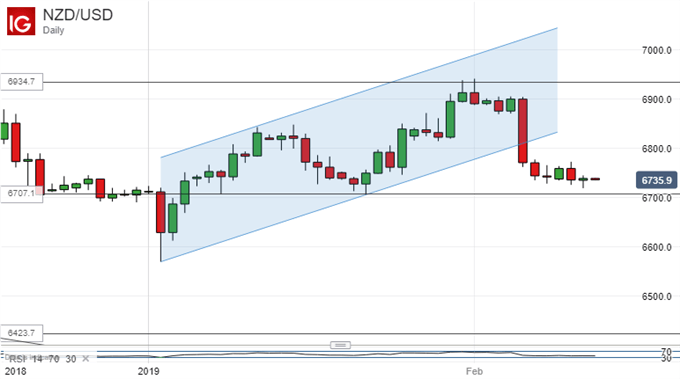 The RBA also downgraded its growth and inflation assumptions, and the New Zealand Dollar clearly shared it some of the pain felt by AUD/USD bulls in the aftermath.

The New Zealand Dollar clearly remains in thrall to a similar policy rethink, with the lows of January 22 at 0.6707 in bearish focus now. They in turn guard the way South to 0.6562- the low of this year so far and also the lowest point since November 1, 2018.