The Australian Dollar made some quick gains Tuesday following the release of a business survey which was slightly less downbeat than its two predecessors.

The monthly snapshot from National Australia Bank revealed a business confidence indicator of 4 for January. This is pretty miserable, historically speaking, certainly well below the long-term average of 6. It was at least better than the threes seen in the two previous months.

Perceptions of business conditions also perked up though. That balance came in at 7, much better than December’s woeful 2 (now revised up to 3).

NAB also changed its view on the likely interest rate path ahead. It now thinks the Official Cash Rate will be held at its 1.50% record low this year and next. Before it had looked for an increase in late 2020.

AUD/USD’s vigor after this modest data was quite surprising at face value but, given this series’ former trajectory, it is likely that the market was positioned for a weaker figure. 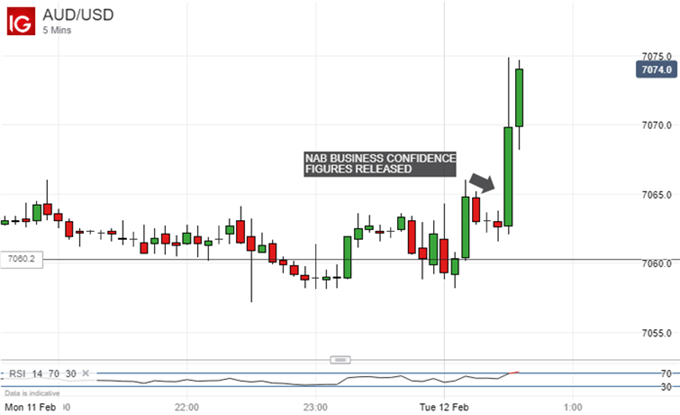 The Aussie was pummeled hard last week by the Reserve Bank of Australia’s admission that rates could yet fall further – an ostensibly major turnaround from its previous conviction that rises were more likely. The currency then took a further battering when the central bank revised down its forecasts for both growth and inflation.

Given an abject lack of interest-rate support it is very hard to see a medium-term prognosis for the Aussie beyond continued weakness, perhaps to a quite marked degree. However, the currency may have been judged to have suffered enough for now, as Tuesday’s response to really quite muted ‘good news’ shows.

For the moment AUD/USD seems to be holding just above the dominant downtrend channel which marked trade from most of last year. 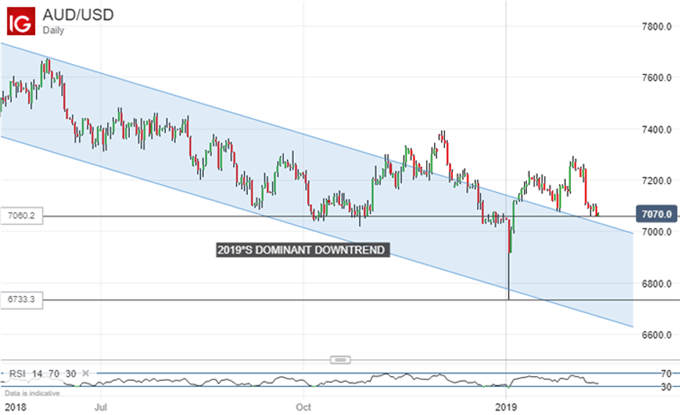 However, the bout of strength against the US Dollar which marked the start of 2019 has now been comprehensively crushed and a slide back into that channel looks overwhelmingly likely.

Australian home loans fell by 6.1% on the month in December, much worse than the 2% fall expected, but this series has been weakening for some time and had no noticeable currency impact.

Whether you're new to trading or an old hand DailyFX has plenty of resources to help you. There's our trading sentiment indicator which shows you live how IG clients are positioned right now. We also hold educational and analytical webinars and offer trading guides, with one specifically aimed at those new to foreign exchange markets. There's also a Bitcoin guide. Be sure to make the most of them all. They were written by our seasoned trading experts and they're all free.