BREXT LATEST: A MESS NO LESS WITH MORE STRESS

GBP/USD may be in the limelight this week as the UK prepares to release a cascade of economic data. The most eyed reports will likely be GDP, Industrial and Manufacturing Production. The overall trend of economic data out of the UK since October has been underperforming relative to expectations according to the Citi Economic Surprise Index. An anticipated debate in parliament on Friday may also move the British Pound.

Prime Minister Theresa May is negotiating with officials in Brussels and is not expected to present an agreed-upon deal to the House of Commons on February 13. Debates and votes on May’s Brexit deal will likely take place the following day and could extend into the following week. The formatofthegathering will be similar to the one on January 29 when MP’s voted on amendments to the PM’s Plan B.

This comes only a week after the Bank of England’s (BoE) ‘Super Thursday’ event which released the interest rate decision, quarterly inflation report and outlook. Rates remained unchanged as the central bank closely monitors the Brexit landscape. Forecasts for growth in 2019 were trimmed – again – from 1.7 percent to 1.2 percent. The BoE is maintaining a gradualist and cautious approach to accommodate the uncertainty associated with the current state of the Brexit negotiations.

GBP/USD in the meantime has been falling ever since it hit the 1.3199 resistance. The failure to breach past this point is likely a signal that underlying optimism lacks enough conviction to continue reaching higher. The pair appear to be flirting now with the upper bound of the September resistance range as the March 29 deadline approaches. 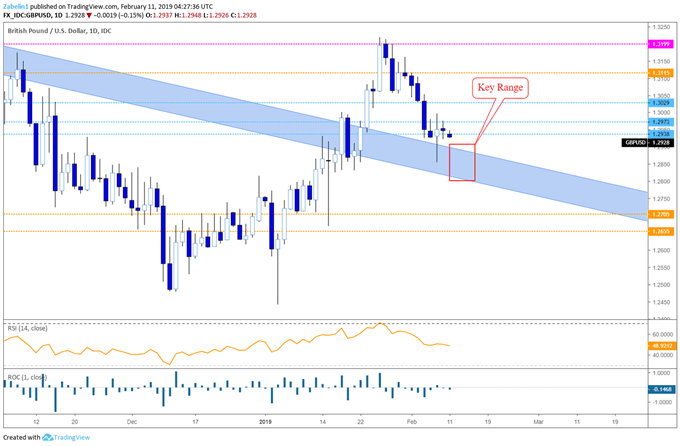 Interested in learning more? Sign up here to get an in-depth analysis of Brexit and its effect on GBP!