A punch-drunk Australian Dollar didn’t move much lower Thursday on yet another gloomy business sentiment survey.

The quarterly snapshot from National Australia Bank showed a confidence reading of just 1 in the quarter to December 2018, down from a previous read of 3. The current conditions assessment fell to 16 from 21. This release comes just after the regular monthly poll from the same organization found businesses similarly depressed. The quarterly reading hardly tells investors anything they didn’t know, however, and the weakening of the monthly survey suggests that the picture may in fact have worsened since the fourth quarter.

In any case the Australian Dollar didn’t fall much further against its US cousin after the survey. 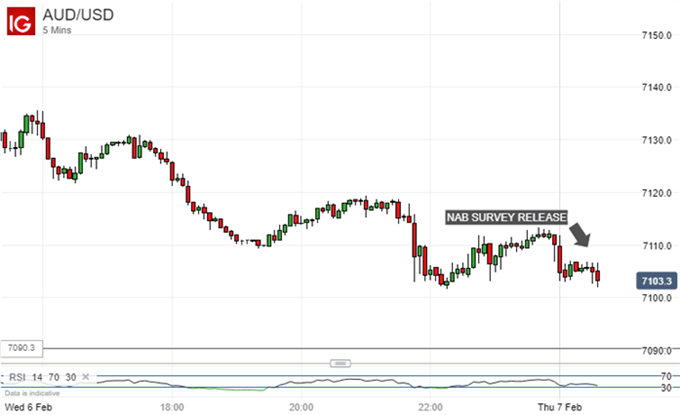 On its daily chart, AUD/USD is very much back on the defensive. It had enjoyed some strength this year as markets reassessed the likelihood of many more US interest rate rises, and as commodity prices rebounded.

Still, the Aussie back-pedaled hard on Wednesday thanks to the Reserve Bank of Australia’s admission that record-low domestic interest rates could yet fall further. Previously the regulator had said that a rise was the most likely next move, albeit not anytime soon. 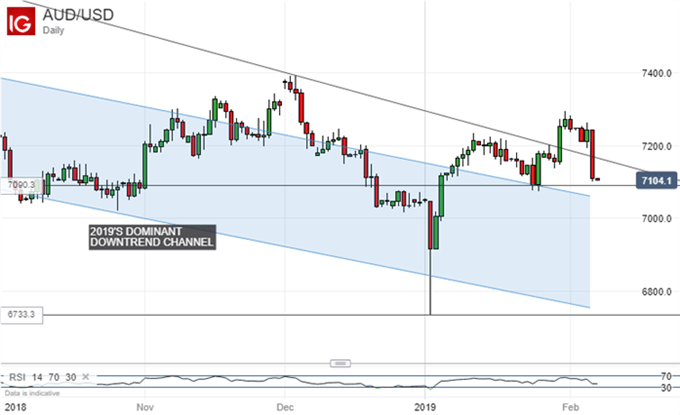 The pair has now fallen back below the downtrend line which held for much of the time since mid-December. It is now focused on support at the top of the long downward channel which held good for most of 2018.

The Aussie could perk up, of course, especially if China and the US come to a lasting trade accord in the months ahead. Australia has as much skin in this game as any third country, given its strong economic and political links with the main actors.

However, for the moment interest rates are running this table and that likely means the road lower is AUD/USD’s clearest path. Rate futures markets had been pricing in cuts to Australia’s Official Cash Rate for quite some time.