Find out what retail traders’ equities buy and sell decisionssay about the coming price trend!

Asia Pacific benchmark stock indexes traded rather mixed following a rosy performance on Wall Street. There, disappointing US economic data underscored the recent dovish turn in the Federal Reserve which boosted the S&P 500. Keep in mind that most markets were closed today for the Lunar New Year, reducing general liquidity.

Japan’s Nikkei 225 aimed cautiously lower as it fell about 0.1%. The ASX 200 soared roughly 1.91%, but that was thanks to a less harsh outcome from a bank inquiry into financial misconduct than expected. Recommendations from the Royal Commission stopped short of calling for forced breakups and tighter lending rules. These would have likely shrunk profits down the road.

Looking at foreign exchange markets, the Australian Dollar rose but that was largely thanks to the RBA rate decision which undermined increased bets of a dovish central bank. The anti-risk Japanese Yen was relatively flat and so too was the US Dollar. S&P 500 futures are pointing a little bit lower which warns that market mood may spoil over the remainder of the day. This might be if US ISM data beats expectations.

Looking at the technicals, the push higher in the ASX 200 resulted in the completion of the inverse head and shoulders pattern that formed last month. Prices achieved the target of the bullish formation just above 5,911. Not only that, but resistance was breached at 5,942 which has opened the door to testing the next uptrend obstacle at 6,140. 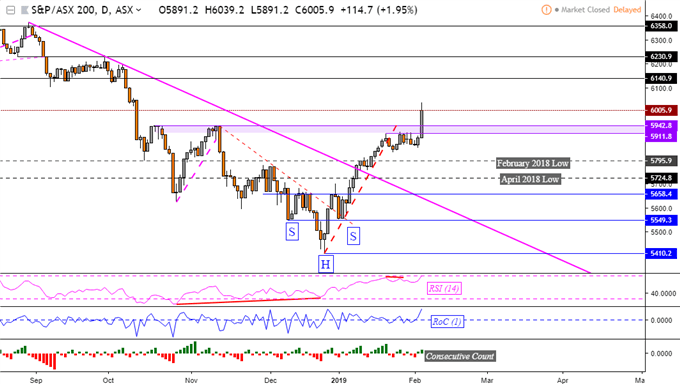