RBA Adamant Next Rate Move is Up, Data Suggests Otherwise

AUD watchers will be placing a close eye on this week’s RBA meeting (Tue) and Statement of Monetary Policy (Fri) considering the deteriorating economic outlook. While RBA’s Harper last week continued to signal that the next move in rates will be a hike, soft Australian data opposes this view.

The housing market in Australia continues to weaken with house prices accelerating its drop, particularly in Sydney and Melbourne, which has fallen near 10% over the past year. Alongside this, given the high funding costs in Australia (50bps above cash rate), the banks have been forced to raise variable rates, consequently providing an added weigh to the housing market, as well as consumer spending. Elsewhere, last week’s NAB survey highlighted that business conditions had suffered its worst fall since the financial crisis.

While recent inflation figures surprised to the upside last week, printing ahead of analyst estimates, the RBA may hold fire on altering its guidance on interest rates for the time being. However, given the weaker economic environment it is likely that the RBA will cut both its growth and inflation forecasts.

Despite the continued weakness observed in the Australian economy, the Aussie Dollar has held up relatively well in recent weeks. Among the supporting factors has been the boost to the AUD’s terms of trade with iron ore prices surging following the dam burst at a key iron ore mine in Brazil. Alongside this, the dovish pivot from the Fed, which in turn has boosted risk sentiment has also provided a lift to high beta currencies (AUD & NZD). On the trade war front, while nothing significant had been agreed between China and the US, the outlook is somewhat more constructive with both President Trump and Xi agreeing to meet and look to reach a deal.

Heading into the meeting, markets are pricing in a 44% likelihood that the RBA could cut rates by the year-end. Consequently, given this dovish pricing, markets may be left disappointed if the central bank continue to signal that the “next move in rates is up rather than down”, which in turn could support the AUD. Amid the soft economic readings in Australia we see scope for a shift in the RBA’s stance and see a rate cut as a more likely scenario than a hike at present, however, the change in stance is more likely to be postponed until a later date. 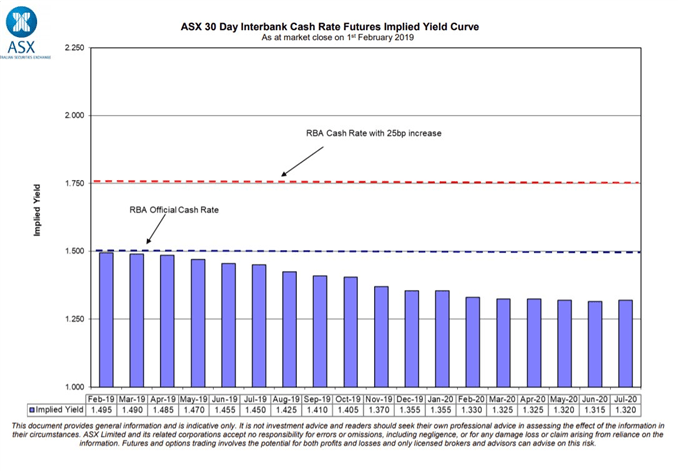 Given the weak domestic factors in Australia, the AUD hovering around 0.7300 had been unjustifiably elevated, the 200DMA is situated at 0.7289, while around 0.7330-0.7400 could be attractive to get bearish on AUDUSD. The descending trendline from the 2018 peak, previously resistance is now acting as support, a firm break below could see 0.7140 support tested.

Option markets are pricing in little in the way of volatility with AUDUSD ATM O/n vols at 11.15 = 33pips breakeven. AUDUSD risk reversals imply a greater premium for puts (downside protection) over calls.