Google’s parent company Alphabet reported earnings after the market close Monday, surprising investors with results comfortably above expectations. Revenue for the fourth quarter read $31.84 versus the $31.28 billion expected. Not to be outdone, earnings per share recorded a beat of $1.91 at $12.77. Despite the great revenue and earnings performance, Google shares traded lower as analysts were disappointed by the firm’s capital expenditure in the fourth quarter. 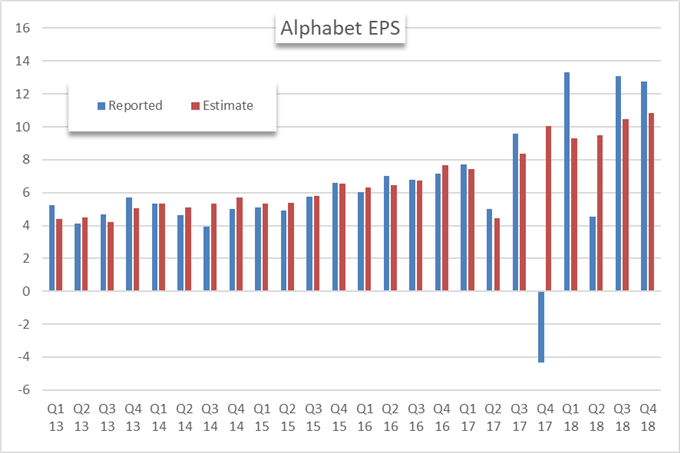 Apart from an 80% increase in spending from $3.84 billion in Q4 2017 to $6.85 billion in Q4 2018, the firm’s other attributes remained encouraging. Paid clicks on Google properties spiked 66% and Alphabet’s operating margin increased by 21% despite a 29% decrease in cost-per-click on Google properties. Still, the strong overall performance was not enough to overcome the considerable spike in capital expenditure and shares of Google slumped roughly 2% in after-hours trading.

FAANG Remains on Top, But with a Caveat

With Alphabet’s earning release today, all five FAANG members have reported earnings for the quarter. Despite the brief correction experienced by the Dow Jones and S&P 500, the high-flying group of tech stocks offered robust quarterly performances nonetheless. All members, apart from Netflix, beat current-quarter revenue and EPS expectations. The group’s performance bodes well for overall equity market sentiment but warnings from Apple, Amazon and others cloud the picture.

To start, Apple’s quarterly performance beat expectations only after guidance was lowered. The announcement subsequently caused a USDJPY flash crash and Apple’s stock price reacted similarly. Elsewhere, Amazon offered impressive results for the quarter but disappointed on forecasts for the future. The underwhelming projections saw Amazon shares trade lower despite the earnings beat.

Outside of FAANG, Caterpillar and Nvidia highlighted slowing economic growth in China and the US-China trade war as reasons for their poor performances and cause for concern in the quarters to come. A full follow-up from Nvidia is due in two weeks when they release earnings. Follow @PeterHanksFX on Twitter for live updates and analysis of earnings reports. 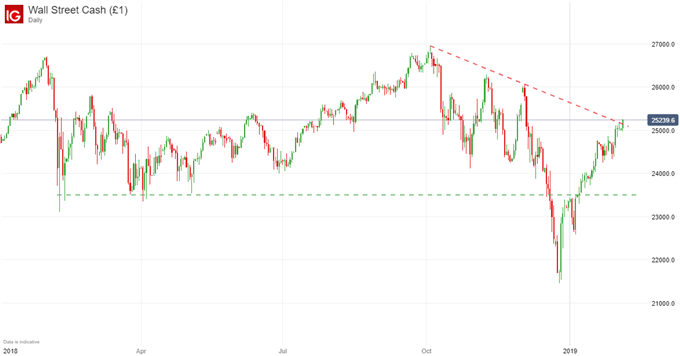 The list of qualifiers and caveats in the recent round of earnings echo the concern of many economists that forecast a period of slower growth ahead. Either way, the warnings should prove worrisome for some of the more skeptical investors, even as the bold ones seek to push the Dow Jones back above 25,250.